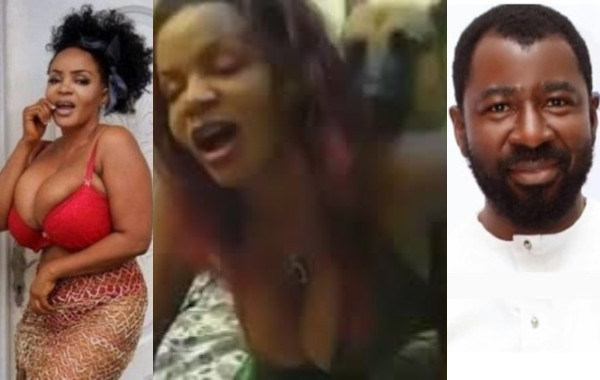 In a lengthy post on her Instagram page, the queen of boobs recalled how she reported the matter then to the Nigeria Police Force, but nothing was done to bring the culprit to book.
The actress also said that she saw it as an insult to her person, after the police recently came for the girl on TikTok that claimed she slept with a dog.

She wrote: “Sometimes a lifetime award turns out to be a lifetime shame…that’s when Nigeria happens to you. Pls @nigerianpoliceforce @nigerian_police_force, I reported this case years ago. But I was just a naive girl …a nobody. It was all over the news. Cossy Ojiakor slept with a dog and got HIV.”

“My image…emotional trauma…my career everything went down the drain. I lost my sense of purpose. Up till date, no justice…no apologies…Nothing. It’s really an insult to me when the Nigeria Police went after the girl on TikTok that jokingly said she slept with a dog.
“What about me that was in the magazine headline. Am I invisible?

“Please solve this case and punish whoever is found guilty. Either Cossy the girl that supposedly slept with the dog or the peddler of the news, who is now a politician in Lagos State.

“The journalist that made millions from the story that broke me. Please, my Instagram family help me tag the right police handle because I lost hope in the Nigerian justice system. It still hurts. I want justice.”

Recall that Cossy Orjiakor made headlines in 2002, after footage was shared on internet wherein she could be seen having s3x with a dog. The footage, said to be a clip from a movie set, had attracted heated backlash, with some arguing that she indeed had s3x with a dog.

Following the public outcry that greeted the scandal, the actress regretted that the producer of the film, the late Chico Ejiro kept mum while the s3x-with-dog scandal which made her a subject of ridicule before many at the time, lasted.