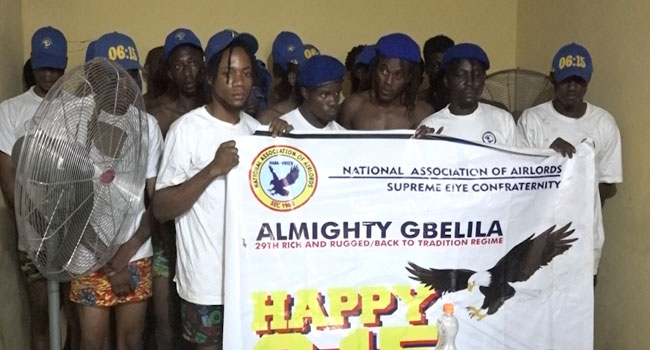 They were apprehended while carrying out an initiation of new members and also celebrating their anniversary within the premises of a hotel in Ogwashi-Uku Aniocha South Local Government Area of the state.

Parading the suspects at the premises of the anti-cultism unit of the force in Asaba, the state police public relations office, Bright Edafe said the suspected cult members were rounded up by operatives of the command’s Buffalo Patrol Team.

Following a tip-off, the operatives stormed the initiation venue, the suspects on sighting the police took to their heels, while some of them shot at the police.

Those who fled were given a chase by the team and the suspected cultists were arrested with two cut-to-size locally made guns, one expended cartridge and the Eiye confraternity regalia.

The police spokesperson said further investigations have commenced, adding that with those found wanting upon completion of investigation will be charged to court.