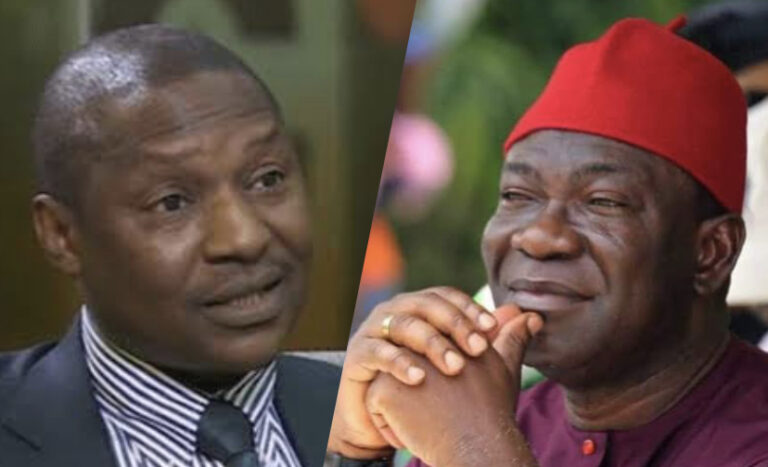 Mr Malami explained that “ it is not a matter over which the federal government can develop any interest.”

Attorney General Abubarkar Malami says the Nigerian government will not interfere with ongoing trial of former Deputy Senate President, Ike Ekweremadu and his wife, Beatrice Ekweremadu, over alleged organ harvesting in the UK.“It has never been the tradition of the Nigerian government to interfere in anything judicial, local or international,” Mr Malami said at the 46th Session of the State House Briefing organised by the Presidential Communications Team at the Presidential Villa, Abuja on Thursday.

“On the intervention of Senator Ekweremadu, I have stated in the course of my presentation that there has been in existence, a mutual legal assistance request and collaboration between Nigeria and other countries across the world.”

“So the implication of what I’m trying to state in essence is we have mutual legal assistance, understanding with the UK, and whichever of the agencies, either the Senator as an accused or suspect, or indeed the agencies in the UK, make any request for international support, we will respond accordingly,” he added.

The Ekweremadus were arrested on June 23 by the UK police over allegations that they tried to traffic a minor to illegally harvest his organ.

The claim that the alleged victim was an under age was subsequently debunked after passports, national ID and other documents showed the person is 21 year old.

On July 25, after over a month in detention, Mrs Ekweremadu was granted bail by a London court under stringent  conditions, while Mr Ekweremadu remained behind bars.