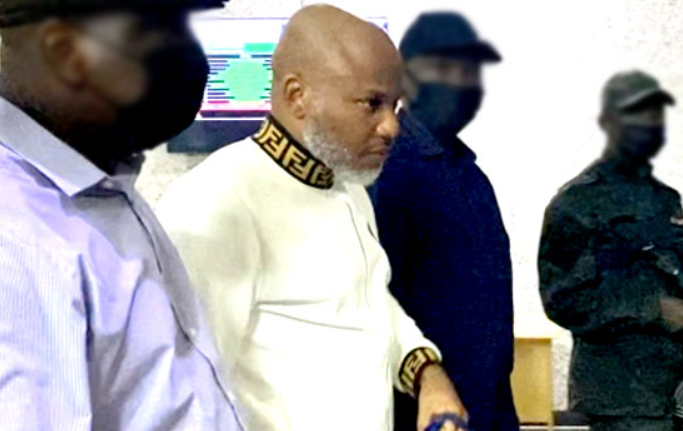 The Federal High Court in Abuja has dismissed the application for bail by the detained leader of the Proscribed Indigenous People of Biafra (IPOB), Nnamdi Kanu.

Justice Binta Nyako, in her ruling on Tuesday, said the suit was a gross abuse of the court process and an attempt to continue to litigate on issues that have already been ruled on.

She, however, advised the applicant to approach the Court of Appeal on the issue of bail, should he feel aggrieved by the decision of the court.

The trial judge stated that since the ruling in July 2017 when Kanu was granted bail till date, the suit has suffered 15 adjournments and the matter has yet to enter a substantive hearing.

She added that she was not satisfied with the reason the IPOB leader gave for his failure to appear in court for the continuation of his trial.

Justice Nyako stated that from the records of the court, Kanu was represented by his lawyer on the day his bail was revoked, likewise his sureties and he has never been denied a fair hearing.

She held that a court could vacate a previous order when confronted with a cogent and verifiable reason.

In the trial judge’s words, “In the instant case, I have not been given any, neither have I been given any reason to set aside the order.”

She insisted that the IPOB leader must explain the reason why he breached the previous bail that was given to him before he could enjoy another favourable discretion from it.

Thereafter, the case was adjourned until November 14 for mention and to await the outcome of Kanu’s appeal at the appellate court.

Tuesday’s ruling comes a month after the court declined to release the embattled IPOB leader on bail on May 18.