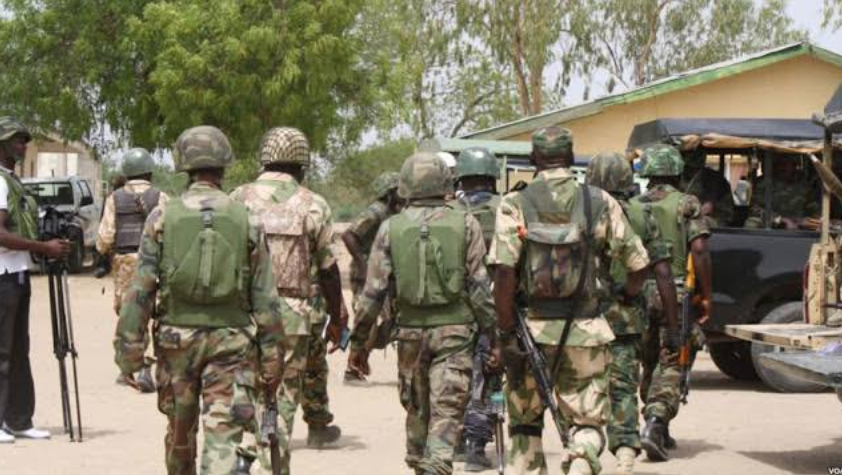 A suicidal army sergeant, Kabiru Aliyu, attached to the 159 battalion, Geidam in Yobe, on Wednesday shot his colleagues, killing one and wounding another, Peoples Gazette has learnt.
A military source told The Gazette that Mr Aliyu, who had wounds on his head and arm and claimed to be drunk, shot his colleagues identified as Corporal Usman and Lance Corporal Goodluck.

While Mr Usman died after being shot in the neck, Mr Goodluck, hit with bullets in the chest and arm, was taken to the hospital for medical treatment.

“Sgt Kabiru Aliyu who claimed to be drunk and used his personal riffle to fired CPL Usman on his neck and he died instantly, while Lcpl Good luck received two bullets, on the chest and on his hand,” the military source said.

According to the source, Mr Aliyu was in his military uniform while he opened fire on his colleagues with his rifle.

Photos of the personnel seen by The Gazette saw the late army personnel’s lifeless body with a gunshot wound on the neck, while Mr Goodluck laid on the hospital bed with blood stains from the gunshot.

However, the spokesperson for the Nigerian Army, Onyema Nwachukwu, did not immediately respond to requests seeking comments on the incident.

Earlier this year, a reportedly drunk soldier attached to the Operation Hadin Kai of the North-East Theatre Command killed three civilians and injured several others in the Mafa Local Government Area of Borno state.