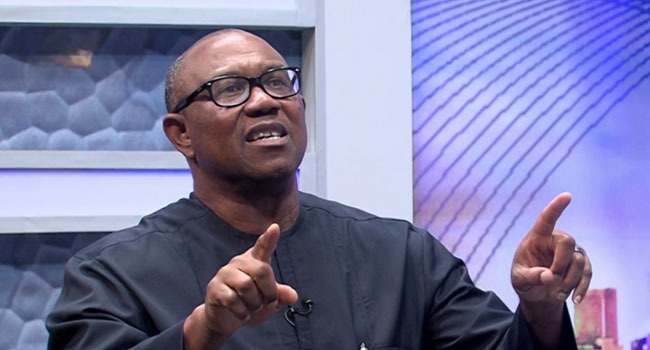 Speaking yesterday during a live interview on Arise TV, the presidential candidate said petrol subsidy is not beneficial to the country’s economy, promising that he would not squander $40 billion on subsidy as currently being done by the All Progressives Congress, APC-led Federal Government.

Petrol subsidy payments gulped N1.27 trillion in the last five months, about 31 percent of the N4 trillion provision for the year. It eroded oil gains as Nigerian National Petroleum Company, NNPC, Limited failed to remit revenue to the federation account.

“If we spent $20 billion on power, we would have been generating and distributing 20,000 megawatts of electricity today.

“It means subsidy alone would have solved a lot of issues in our education, health and power. If we have 20,000mw, we will be growing at more than 4 percent and add over $100 billion to our GDP.

“Within the same period, we have borrowed $90 billion, which we are servicing. With this, you could see total mismanagement of resources that could have changed the entire North… that vast land would have been huge farmland,” he said

On whether or not he would remove subsidy, Obi said: “We have to study and look at it critically. Yes and No, because I would remove it, but I have to offer them what would be equivalent to what we are removing.

“I cannot spend $40 billion on subsidy and expend 50 percent of it on education and health even security. Are you saying [petrol] subsidy is more important than the security of lives and property?

“I have been saying subsidy is a scam, and I will continue to say it. There are so many scams all over the place, including the cost of governance.”

On his running mate, Obi said he prefers a younger and fresh politician.

According to him, a younger person who has “something to offer” to complement his ticket would be chosen instead of bringing “an old hand” who had been in government in the past.

The LP presidential candidate said although his running mate would be unveiled soon, he was yet to make a choice.

“We are talking to quite a number of people and Hakeem Baba-Ahmed is a capable hand. But I wish I can work with somebody who is younger.

“I prefer younger people who have a lot to offer rather than recycling old hands. I want a competent person and I am building a formidable team,” he said.

We’ll replicate my Anambra achievements on a larger scale

Asked when his manifesto would be released, Mr Obi said what he planned to do as president had been practiced during his time as governor of Anambra State, adding that he intends to replicate his achievements in Anambra on a large scale in Nigeria, if elected president.

“How can I hire professors to write or draft policy documents for me that I don’t even believe in? What I did in Anambra and what I achieved are what we will replicate on a larger scale. We want Nigeria to become the engine of production.

“I will assemble the type of people I had in Anambra State. I told them, from day one, if you agree with me in three meetings, you will go. I want those who can look into my face and say, Mr President, you are wrong,” the former governor added.

On Nigeria, Obi said Nigeria’s affairs were being piloted by ‘vehicle drivers’ instead of professional and certified pilots.

His words:  “Nigerians have consistently hired vehicle drivers instead of qualified pilots to pilot Nigeria’s affairs. My commitment is to let our campaign dwell on challenges in the country. There are a lot of problems besieging this country.

“This country will soon default on its debt servicing. This is what should be preoccupying us now. Universities have shut down and we are talking about who we’ll vote for. Let’s deal with the issues.

“This election will not be based on ‘my turn’, ethnicity, and religion. It will be based on a Nigerian agenda to save this Nigeria. Nigeria is in a coma, and it needs a specialist, and that is why I’m offering to save its life or it will die. I’m appealing to people to vote to save Nigeria, and to save Nigeria is to hire the best.”

He added that primitive considerations by Nigerians during electoral cycles had led Nigeria to the current quagmire, adding that in 2023 Nigerians must elect a capable candidate to pilot the country’s affairs.