Why ASUU Strike Has Not Been Resolved – Ngige 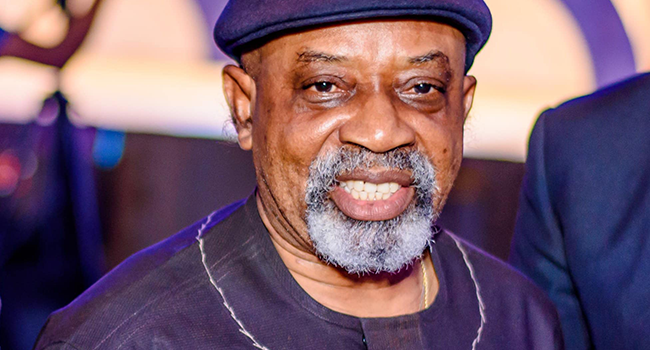 “But I used my discretion to weigh the situation to know if it would cause more delay in the resolution of the dispute in a court process.”

The Minister of Labour and Employment, Chris Ngige, Tuesday, said voluntary conciliation was adopted to ensure a quick resolution of the strike by the Academic Staff Union of Universities (ASUU).
Mr Ngige made this known at the commencement of a three-day capacity-building workshop on International Labour Standards and Dispute Resolution in Nigeria on Tuesday in Abuja.

The workshop is organised by the Industrial Arbitration Panel (IAP) in collaboration with the International Labour Organisation (ILO).

The minister said that voluntary conciliation was adopted instead of arbitration in order not to delay the resolution process with the striking lecturers.

“I could have transmitted the matter to the IAP or the National Industrial Court of Nigeria (NICN).

“But I used my discretion to weigh the situation to know if it would cause more delay in the resolution of the dispute in a court process,” he said.

The minister, however, recalled that ASUU had embarked on strike on February 14 and voluntary conciliation started on February 22 and subsequently, on March 1.

According to him, by the second meeting, most of the issues arising from the 2020 Memorandum of Action (MOA) signed between ASUU and the Ministry of Education with other government agencies involved were conciliated leaving out only two.

“The two outstanding issues were the conditions of service, which according to the 2009 Agreement would be reviewed every four years.

“The last review was in 2013 and we started the review in 2018 under Wale Babalakin (SAN) as the chairman of the renegotiation committee. We could not conclude because Babalakin left.

“A new committee headed by Munzali came. Munzali finished his work and put in his report at the Federal Ministry of Education,’’ he said.

He noted that all the committees including the previous Onosode committee were all internal committees of the Ministry of Education.

He said that they discussed with the unions and gave them offers and counter offers vis-a-vis what they wanted.

“Once the committees finished, their products are sent up.

“The major issue here is salary and wage review. That is where they are before ASUU embarked on strike,’’ he said.

Mr Ngige said that once a strike occurred, it triggered the content of the Trade Dispute Act (TDA) on how to resolve the industrial action.

He said the ministry of education was still handling the matter and it was transmitted back to them.

“If a party wants us to transmit a matter back to them to have a second look, you assist them. That is what you call voluntary conciliation.

“It is voluntary because if I apprehend and bring all the parties to the negotiation table and a party requests that I should take the matter to NICN, I will do so,’’ he said.

Mr Ngige also described the workshop as one of the reforms ongoing in his ministry as some arbitrators had not fully understood the tenets of the panel of IAP and were handicapped in discharging their duties.

He described arbitration as one of the statutory stages in trade dispute resolution commencing with internal mechanisms.

“In addition to the workshop billed to reform the way and manner of discharging the statutory function of the IAP.

“The labour laws have been worked on by tripartite body, comprising the government, employers and workers representatives.

“This is in the form of the two federations of trade unions to take on board on the new developments in labour legislations and fill in identified anomalies and lacunae in our current labour laws,’’ he said.

He added that the bills were at the stage of proceeding to the Federal Executive Council (FEC) for further necessary action before going to the National Assembly for consideration.

Mr Ngige said the passage of the bills would be the new dawn of labour administration in the country.

The Chief Registrar of IAP, Abduhamid Ibrahim, said the purpose of the workshop was to provide a unique opportunity for members of IAP and its management staff.

“They will acquire sound knowledge and experience in modern skills regarding labour disputes prevention and resolution in line with international labour standards,” he said.

ILO Country Director to Nigeria, Vanessa Phala, called for investment in studies and research to quantify what should be the impact of social dialogue and collective bargaining in the development processes.

She also called for the development of indicators and parameters to measure social and industrial relations and how their governance impacts productivity.

“If we invest in these domains, I am sure we shall stand and win the battle against poverty and misery,’’ she said.