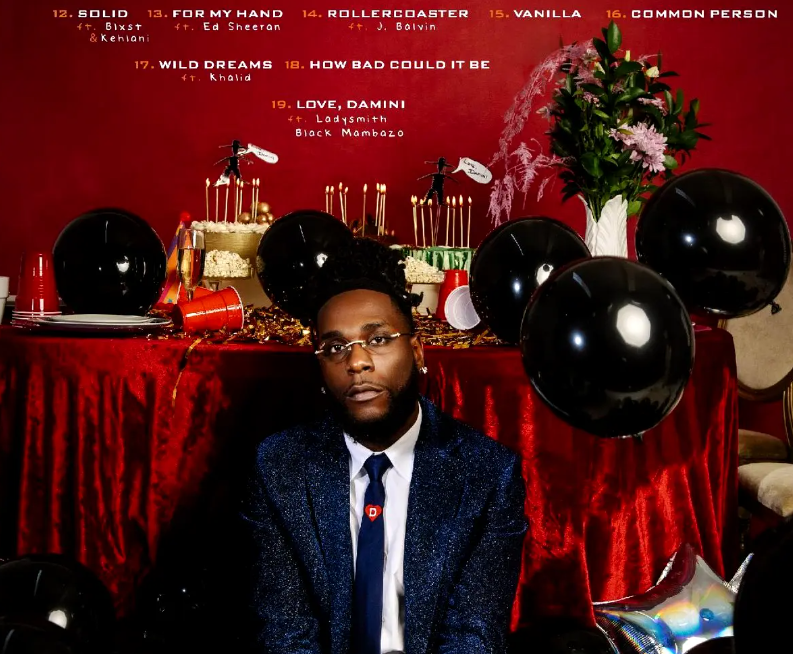 The album is set to be released on Friday, July 8th – a week after he celebrated his 31st year birthday.

The album cover was shot by Nigerian/American Photographer and Creative
Director, Mikey Oshai.

He disclosed that the project would highlight his personal struggles.
“Love, Damini is a personal body of work. It’s about the ups and downs, the
growth, the L’s and W’s.

“I’m excited to share this journey and roll [it] out with you all,” he had
written.

The 19-track album includes already released songs “Kilometre” and
international hit/chart topping single-“Last Last”; which Burna Boy revealed in
an interview that American R & B star Toni Braxton gets 60% of the royalties
from the song- a sample of Braxton’s 2000 R&B hit, ‘He Wasn’t Man
Enough’.

The African Giant promised to drop new teasers off his forthcoming “Love
Damini” album every day until the 8th July official release date
He made this known in a tweet: “Apparently I was born just after midnight, so I’m gna be dropping teasers
everyday till release at midnight #LOVEDAMINI

Keeping to his promise, he teased Track 5 “Cloak and Dagger” in a follow-up tweet. The award winning superstar-singer also performed the 13th track of the album- “For My Mind” ft. Ed Sheeran at the British star’s Wembley concert last week.
The ecstatic fans were thrilled by the performance of the love-themed song. We expect the upcoming album to be a hit as it is Burna Boy’s first since the
historic Grammy Award Winning album- Twice as Tall).