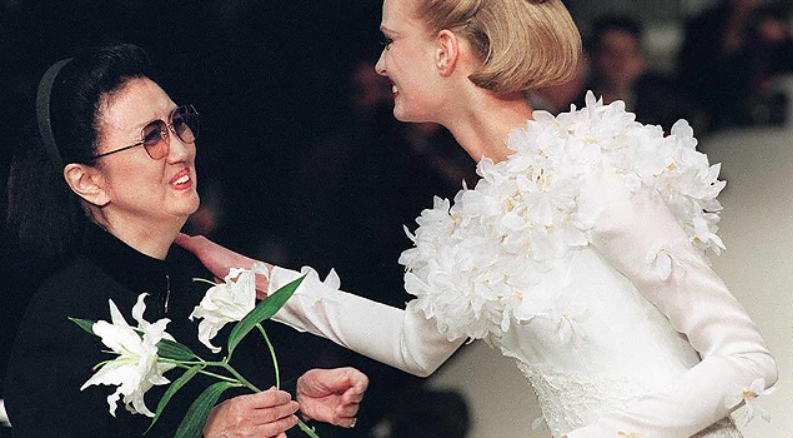 Nicknamed “Madame Butterfly” for her signature winged motif, over the decades Mori’s luxurious creations were worn by Nancy Reagan, Grace Kelly and numerous other members of high society.

But she was also a pioneer for Japanese women as one of a tiny number to head an international corporation.

Public broadcaster NHK and other media outlets also reported the news, saying a private family funeral had already taken place and giving the cause of her death as “old age”.

Mori’s trailblazing career took her from Tokyo, where she started out making costumes for cinema, to New York and Paris, where in 1977 her label became the first Asian fashion house to join the rarefied ranks of haute couture.

Japanese fashion greats such as Issey Miyake, who died earlier this month, followed in her path.

Though she shuttered her Paris atelier in 2004 after her last couture show there, Hanae Mori boutiques remain open in Tokyo and her fragrances are still sold worldwide.

In January, she summed up her feelings towards the industry in a special column for Japan’s Yomiuri Shimbun daily.

“Fashion is something that pushes you, gives you courage to spread your wings and allows you to have adventures,” she said.

In its heyday, Mori’s fashion and business empire occupied a whole building in Tokyo designed by the architect Kenzo Tange — later torn down and replaced with another structure at typical Japanese speed.

From the loss of the building to the retirement of her fashion house from haute couture, “not everything was positive,” she reflected in her Yomiuri column.

“It was like my butterfly wings were torn off. But this butterfly was able to fly all over the world for 70 years, because I loved making clothes.”