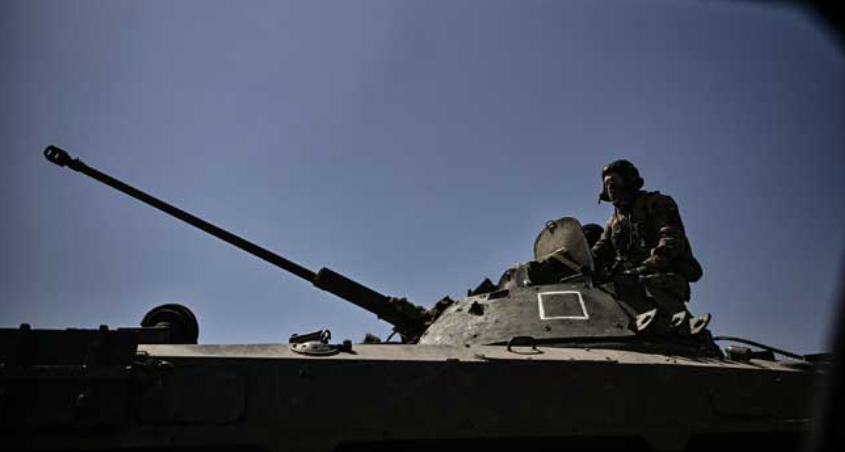 Russian missiles struck the city of Vinnytsia in central Ukraine on Thursday, killing at least 12 people in what President Volodymyr Zelensky called “an open act of terrorism“.

Ukraine’s emergency services said there were “12 dead, including one baby, and 25 wounded” and dozens of rescue workers were fighting to put out a large blaze sparked by the strikes.

The news came as EU foreign and justice ministers prepared to meet in The Hague for a conference on alleged Russian war crimes.

Zelensky said he would be addressing the meeting via video call and Ukrainian Foreign Minister Dmytro Kuleba is set to attend.

“Every day, Russia kills civilians, kills Ukrainian children, carries out missile attacks on the civilian facilities where there is no military target. What is this, if not an open act of terrorism?” the Ukraine leader said in a statement on social media.

Zelensky has vowed to hold Moscow to account and has called for a special war crimes tribunal to be set up in the Netherlands.

The International Criminal Court in The Hague opened an investigation into possible war crimes in Ukraine just days after Moscow’s forces invaded and it dispatched dozens of investigators to the country to gather evidence.

Its prosecutor Karim Khan also later visited Bucha, a town outside Kyiv where AFP journalists discovered 20 bodies in civilian clothing lying in a street, and where officials later said hundreds of other people had been killed.

Russia invaded Ukraine on February 24 and the conflict has raged since then, killing thousands of people, destroying cities and forcing millions to flee their homes.

In recent weeks, Russian strikes in central Ukraine away from frontlines in the east and the south have become relatively rare.

But the war has raged around cities like Mykolaiv in southern Ukraine near the Black Sea which the presidency said was hit by a “massive missile strike” earlier on Thursday.

“Two schools, transport infrastructure and a hotel were damaged,” the presidency said in its morning military update.

The skeletal insides of one building gutted by the strikes were visible in images distributed by local officials, with municipal workers clearing bricks and rubble-strewn after the attack.

Fighting in Ukraine has focused on the industrial Donbas region in the east, but Kyiv’s troops have been pressing a grinding counter-offensive in the south to retake Kherson.

The presidency added — without elaborating — that residents along the southern front in the Kherson region were reporting an “increase in equipment and the number of Russian troops.”

In east Ukraine, Moscow-backed troops said they were closing in on their next target.

“Siversk is under our operational control, which means that the enemy can be hit by our aimed fire all over the area,” a pro-Moscow rebel official, Daniil Bezsonov, was cited as saying by Russian state-run news agency TASS.

At a Ukrainian trench position along the eastern frontline, a 25-year-old soldier who goes by the nom de guerre Moryak was working to fortify defences.

“We hide when they shell, we dig when it’s calm,” he told AFP journalists.

A fellow combatant in their trench dismissed the idea Ukraine and Russian forces could reach an agreement to halt the fighting, explaining their goal was: “Total victory”.

Several rounds of negotiations to end the fighting at the beginning of the conflict fell through, but delegations from Kyiv and Moscow met in Istanbul this week to discuss unblocking Ukraine’s grain exports.

The high-stakes meeting involving UN and Turkish officials in Istanbul broke up after slightly more than three hours with an agreement to meet again in Turkey next week.

“The success of this story is needed not only for our state but also — without exaggeration — for the entire world,” Zelensky said in his evening address Wednesday after the talks.

The conflict in Ukraine has pushed up grain prices and Europe is suffering from sky-rocketing energy bills stemming from sanctions on Russia and Moscow’s move to limit gas flows to Europe.

US Treasury Secretary Janet Yellen said Thursday that Russia’s war in Ukraine posed the “greatest challenge” to the global economy, as G20 ministers prepare to start talks in Indonesia.