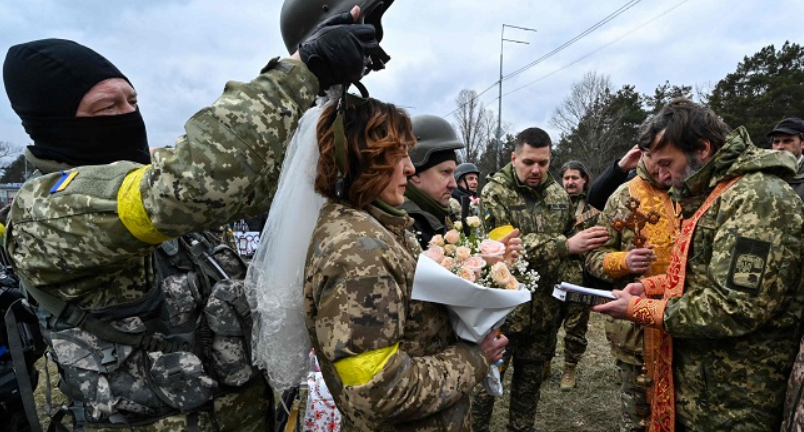 She should have awoken to the sound of popping champagne corks on her wedding day, but Tetyana was instead startled out of bed by Russian rocket fire near her home in central Ukraine.

“At first I thought it was thunder. But the sky was clear, and I realised that it was shelling,” the 31-year-old designer told AFP, recalling how she raced to the corridor outside her room in case of a direct hit.

Shocked at the destruction wreaked by the pre-dawn explosions but determined to go ahead with their nuptials, Tetyana and her fiance Taras exchanged their vows on schedule, six hours later.

“Initially I thought we should cancel the wedding, but my fiance told me we should go ahead…. The war doesn’t have any right to ruin our plans,” said Tetyana, who asked for the couple to be allowed to use assumed names.

“And we have the right to create our family and live our lives to the fullest.”

The couple, who married in June in the industrial hub of Kremenchuk, 250 kilometres (155 miles) southeast of Kyiv, are part of a massive surge in weddings brought on by the war with Russia.

Her neighbour since the age of six, Taras proposed to Tetyana last year and they had originally envisaged a spring wedding.

“In May we realised that the war might last quite a long time. We decided not to postpone life until later because, as this war has shown us, later might never happen,” Tetyana told AFP.

In the Poltava region where Tetyana and Taras tied the knot, there were 1,600 weddings in the first six weeks after Moscow’s February 24 invasion — compared with 1,300 for the whole of 2020.

– ‘The war goes on’ –
In the capital the uptick is even more pronounced, with 9,120 marriages registered in five months, a more than eight-fold increase on the 1,110 ceremonies that took place during the same period in 2021.

A sunny recent Saturday in Kyiv saw more than 40 newlyweds embark on their lives together in one downtown register office.

“Getting married during the war is the bravest and hardest step you can take, because you never know what will happen next,” said Vitaliy, 25, who was about to marry 22-year-old Anastasiya in full military uniform before heading to war.

“I could leave for the front at any moment.”

In Ukraine, would-be spouses have been taking advantage of a simplification in the red tape around marriage that allows them to wed on the spot, rather than having to register first and come back after a long wait.

Vitaliy and Anastasiya, who did not give their surnames, have had vague notions of making their commitment official for three years — but only signed up the day before the happy occasion.

“The war goes on. It’s better to do it now,” the groom told AFP.

Vitaliy Charnykh has been conducting back-to-back ceremonies at the administrative building since early March, and sees his role as his own special contribution to the war effort.

“As a civil servant, I believe I can help my country by supporting Ukrainians emotionally,” the 21-year-old told AFP.

– ‘Defiant message’ –
Unsure of what the future might bring and suddenly forced to focus on the things that matter, young lovers have historically proven unable to resist the urge to formalise blossoming romance in wartime.

At the height of World War II in 1942, the United States saw 1.8 million weddings in 12 months — an 83 percent increase from a decade earlier.

Charnykh said he had seen a particular upsurge in soldiers getting married.

“In such tough times, people don’t really know what will happen tomorrow, so they are eager to marry as soon as possible,” he said.

Daria Steniukova, a 31-year-old yoga teacher from Vinnytsia, 200 kilometres southwest of the capital, had been planning her wedding to 30-year-old Vitalii Zavalniuk for weeks but disaster struck with just one day to go.

“We were shocked but determined to go through with it. It was out of the question to give up. My house was ruined, but not our life,” she said.

They were forced to postpone the celebration with friends and family — no one in Vinnytsia was in the mood for partying — but they set their hearts on swapping vows that day in an alternative venue.

“None of the administrative centres had a single free slot. But we decided to go to one even though we were told that we had no chance,” Steniukova told AFP.

“We were ready to wait the whole day but then we got a result: we were married within three minutes of arriving.”

Topping an already astonishing wedding, they marked their union in an unusual but striking way — opting for a photo shoot in Steniukova’s bombed flat.

“It was a defiant message to the whole world — stressing how strong Ukrainians are. We are ready to get married even with rockets flying over our heads.”