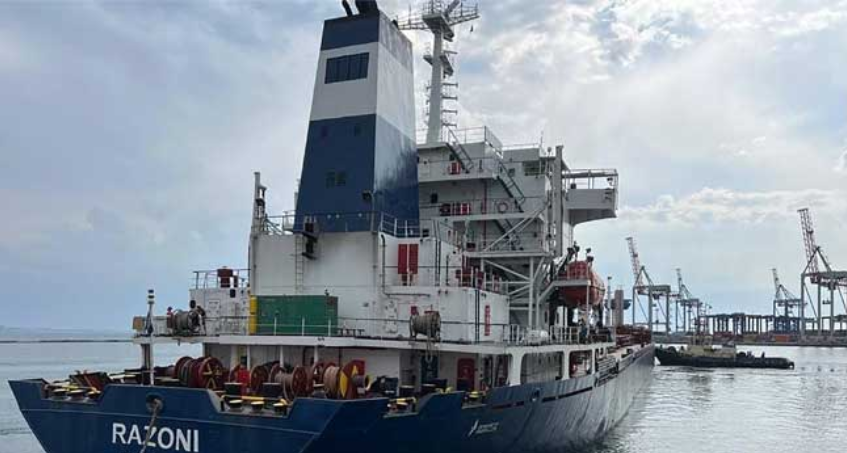 The first shipment of Ukrainian grain left the port of Odessa on Monday morning, Turkey announced, as Kyiv said the “brutal” shelling by Moscow of the southern city Mykolaiv had killed an agriculture tycoon.

The blockage of deliveries from warring Russia and Ukraine — two of the world’s biggest grain exporters — has contributed to soaring food prices, hitting the world’s poorest nations especially hard.

Last month both sides signed a landmark deal with Turkey and the United Nations aimed at relieving the global food crisis.

“The ship Razoni has left the port of Odessa bound for Tripoli in Lebanon,” the Turkish ministry said in a statement.

Other convoys would follow, respecting the maritime corridor and the agreed formalities, it said.

The Joint Coordination Centre, the organisation overseeing the grain exports, said the Razoni is carrying “over 26,000 metric tonnes” of maize.

While the much-needed grain exports will be welcomed, the war in Ukraine rages on.

AFP journalists witnessed intense Russian bombardment of the eastern town of Bakhmut after Ukrainian President Volodymyr Zelensky called for civilians to leave the frontline Donetsk region bearing the brunt of the Kremlin’s offensive.

“Today, one of the most brutal shellings of Mykolaiv and the region over the entire period of the full-scale war took place. Dozens of missiles and rockets,” Zelensky said in an address.

“I want to thank every resident of Mykolaiv for their indomitability.”

Ukrainian agricultural magnate Oleksiy Vadatursky, 74, and his wife Raisa were killed when a missile struck their house, authorities said.

Zelensky offered condolences and paid tribute to Vadatursky in his Sunday address.

Mykolaiv — which has been attacked frequently — is the closest Ukrainian city to the southern front where Kyiv’s forces are looking to launch a major counter-offensive to recapture territory lost after Russia’s February invasion.

Russian authorities in the Crimean Black Sea peninsula — seized by Moscow from Ukraine in 2014 — said a small explosive device from a commercial drone, likely launched nearby, hit the navy command in Sevastopol.

The local mayor blamed “Ukrainian nationalists” for the attack that forced the cancellation of festivities marking Russia’s annual holiday celebrating the navy.

But Ukraine’s navy accused Russia of staging the attacks as a pretext to cancel the festivities.

The claim and counterclaim came as the dispute over which side struck a jail holding Ukrainian prisoners of war in Kremlin-controlled Olenivka rumbled on.

Russia’s defence ministry said Sunday it had invited the International Committee of the Red Cross (ICRC) and the United Nations to visit the site “in the interests of an objective investigation”.

But the ICRC said Sunday it had yet to receive approval to enter the site.

Russia’s military said 50 Ukrainian servicemen died, including troops who had surrendered after weeks of resisting the bombardment of the Azovstal steelworks in the port city of Mariupol.

Ukraine says Russia was behind the attack, with Zelensky accusing Moscow of the “deliberate mass murder of Ukrainian prisoners of war”.

AFP journalists on Sunday saw one wounded man collected by an ambulance after a ferocious bombardment of the town of Bakhmut in the Donetsk region.

Zelensky warned on the weekend that thousands of people, including children, were still in Donetsk’s battleground areas.

He urged people to leave the besieged region, echoing calls from the authorities in recent weeks to evacuate.

“Leave, we will help,” Zelensky said. “At this stage of the war, terror is the main weapon of Russia.”

Official Ukrainian estimates put the number of civilians still living in the unoccupied area of Donetsk at between 200,000 and 220,000.

A mandatory evacuation notice posted Saturday evening said the coming winter made it a matter of urgency, particularly for the more than 50,000 children.

Kateryna Novakivska, a deputy commander of a Ukrainian unit, said she was fighting so her comrades could be reunited with their families.

“The morale of our servicemen is at a high level now, but everyone wants to visit their homes, see their relatives and loved ones,” she said.