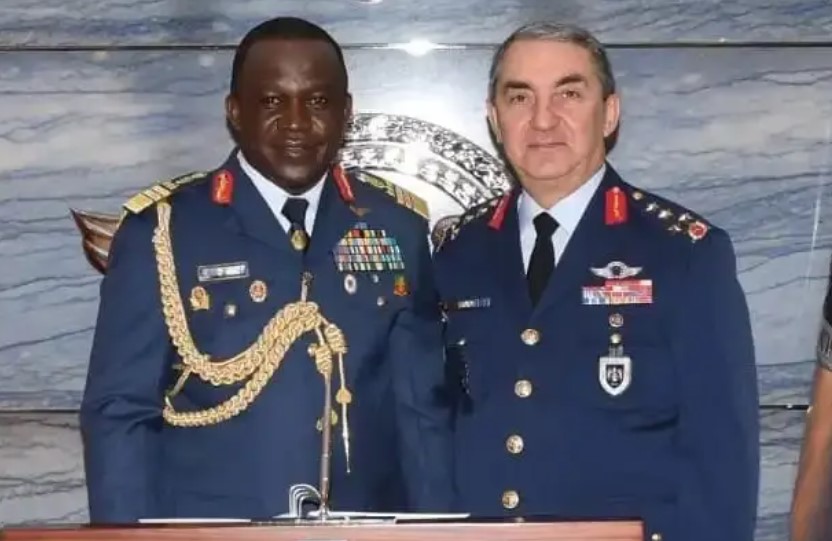 This was made known when Air Marshal Oladayo Amao recently paid a courtesy call on the Commander TurAF during his 5-day official visit to Turkey.

According to a statement signed by Sir Commodore Edward Gabkwet, Director of NAF Public Relations, “Both also emphasised the need for Nigeria and Turkey to share their experiences on the use of unmanned aircraft systems in counterterrorism operations”.

This, according to them would enable strategic synergy and enhance proficiency with renewed commitment to wipe out terrorism while appreciating Turkish military experience in counter-terrorism operation which spanned over a decade,

Air Marshal Amao stated that Turkey was able to achieve operational successes against terrorists due to the usage of right military equipment.

“Turkey has succeeded in developing a robust defence industrial sector capable of meeting up to a significant percentage of critical requirements of her armed forces and other security agencies”, he said.

Air Marshal Amao therefore called for greater collaborations with the Turkish Air Force Command, even as he said, the NAF appreciates the existing cooperation in the areas of training and extension of invitation for NAF personnel participation in some of the TurAF international military exercises.

He then requested for more support from the TurAF in the areas of upgrade and modernization of platforms, air defence training, special forces training as well as training slots in information communication technology for NAF personnel.

While reiterating the need for strong collaboration in defence technology, the CAS stated that the signing of Defence Industry Cooperation Agreement by the 2 countries offered greater opportunity for the NAF and TurAF to work more closely together.

In his remarks, the Commander, Turkey Air Force, General Hasan Kucukakyuz noted that Turkish Air Force is willing to deepen cooperation with the NAF by assisting the Service in any area that could ultimately strengthen its operational capabilities.

He stated that the NAF would, from now, fully participate in its international military exercises, including Anatola Eagle.

General Hasan promised to liaise with the NAF and assist in all areas of military cooperation with other Services in Turkey as well as defence procurement concerns.

The 2 air chiefs agreed to fashion out modalities that would enable a meeting between officers of the 2 air forces to outline areas of comprehensive cooperation that could be of mutual value to botho sides.

During the 5-day visit, the CAS toured some prominent Turkish defence companies for identification of possible defence products that could be required by the NAF.

He also paid a courtesy call on the Nigerian Ambassador Extraordinaire Plenipotentiary of the Federal Republic of Nigeria to the Republic of Turkey, His Excellency Ismail Yusuf Abba.