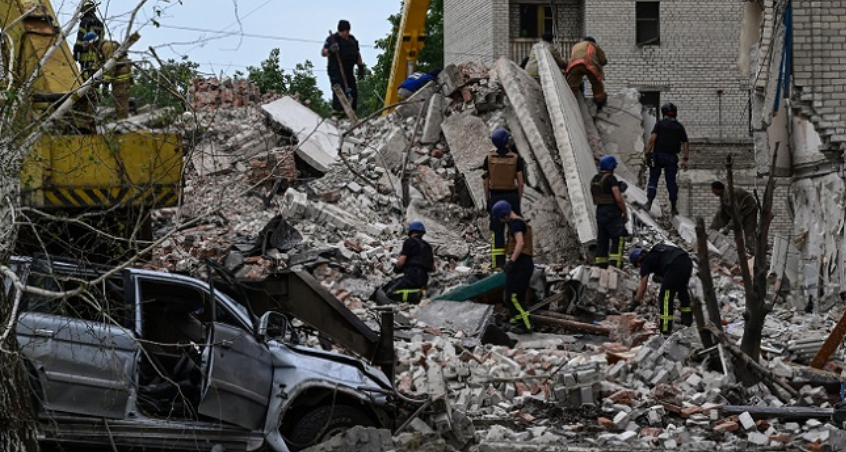 Rescue workers in blue helmets could be seen digging through debris and clearing rubble from the collapsed remains of a two-storey building in Toretsk in the industrial east that was struck by Russian artillery early Monday.

“Rescuers found and recovered the bodies of five dead people in total. Three people were rescued from the rubble and one of them died in hospital,” the emergency services said, adding their rescue operations had concluded.

Toretsk, a town with of around 30,000 residents lies some 50 kilometres (30 miles) south of Kramatorsk, a key target for Russian forces that were ordered into Ukraine in February.

They initially failed to capture the capital Kyiv early in the invasion but have made gains in the eastern region of Donbas recently, capturing the sister cities of Lysychansk and Severodonetsk.

He cited “a great number of crimes against the foundations of national security and the connections established between Ukrainian law enforcement officials and Russian special services,” making the announcement.

Deputy Head of the Presidency Andriy Smirnov told local media the two were suspended to prevent them from “potentially influencing criminal proceedings against employees of the Security Service of Ukraine”.

Zelensky on Monday appointed 39-year-old Vasyl Malyuk — first deputy head of the SBU security services since March — as acting security chief, according to a presidential decree.

In Brussels, the EU’s foreign policy chief warned that Russia’s blockade of Ukrainian ports was threatening grain supplies to tens of thousands of people vulnerable to starvation and said it must end.

“It’s an issue of life and death for many human beings. And the question is that Russia has to de-block and allow Ukrainian grain to be exported,” Borrell told reporters.

His comments came as Russian and Ukrainian negotiators are due to meet UN and Turkish diplomats in Istanbul on Wednesday to discuss a possible agreement to end the months-long blockade of Ukraine’s ports.

Ukraine Foreign Minister Dmytro Kuleba said in an address to the officials that “weapons to Ukraine, sanctions on Russia, and accountability for Russia are the three ways to restore peace, enhance security, and protect stability in Europe.”

A Ukrainian counter-offensive in the direction of those Black Sea ports has been gaining momentum and Kyiv said Monday that Russia was digging in along frontlines in the Kherson region where Kyiv’s army is attacking.

Ukraine meanwhile accused Russia of again carrying out bombardments on civilian infrastructure in nearby Mykolaiv, a battered city near the Black Sea coast, that has been targeted repeatedly in recent days.

Battlefield dynamics in the south — and in the east — have shifted, Kyiv and observers of the conflict say, with the delivery of long-range precision artillery to Ukraine by its Western allies.

Those weapons are a key concern for Russia, and Defence Minister Sergei Shoigu during a recent troop inspection said Moscow’s forces must set about neutralising systems like the US-supplied Himars.

In a BBC television interview broadcast Sunday, the head of Britain’s armed forces, Admiral Tony Radakin, estimated that 50,000 Russian soldiers had been killed or wounded in the invasion with nearly 1,700 Russian tanks and some 4,000 armoured fighting vehicles destroyed.

Radakin suggested that Russia’s land forces may pose less of a threat now, but more than 20 weeks since the invasion began, Moscow said Saturday it would step up its military operations.