US Warns Russia Not To Divert Power From Ukraine Nuclear Plant 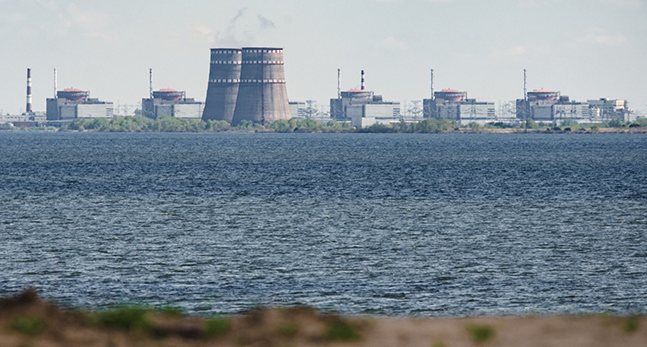 Washington on Thursday warned Russia against diverting energy from a nuclear plant Kyiv says was cut off from its grid, as calls for an independent inspection of the facility mount.

Ukraine’s Zaporizhzhia nuclear plant is under occupation by Moscow’s troops and was disconnected from the national power supply on Thursday, the state energy operator said.

The United States cautioned Russia against redirecting energy from the site.

“The electricity that it produces rightly belongs to Ukraine and any attempt to disconnect the plant from the Ukrainian power grid and redirect to occupied areas is unacceptable,” State Department spokesman Vedant Patel told reporters.

“No country should turn a nuclear power plant into an active war zone and we oppose any Russian efforts to weaponise or divert energy from the plant.”

The International Atomic Energy Agency (IAEA) said Ukraine had informed it the plant temporarily lost connection — “further underlining the urgent need for an IAEA expert mission to travel to the facility”.

“We can’t afford to lose any more time. I’m determined to personally lead an IAEA mission to the plant in the next few days,” the organisation’s Director General Rafael Mariano Grossi said.

White House Press Secretary Karine Jean-Pierre urged Russia to agree to a demilitarised zone around the plant and “allow the IAEA to visit as soon as possible to check on the safety.”

The Zaporizhzhia plant — Europe’s largest nuclear facility — has been occupied by Russian troops in southern Ukraine since the opening weeks of the war, and remained on the frontlines ever since.

Recently Moscow and Kyiv have traded blame for shelling around the complex, a “highly volatile” development the IAEA says “underlines the very real risk of a nuclear disaster”.

President Volodymyr Zelensky described Russian actions around the plant as a menace.

“Russia has put Ukrainians as well as all Europeans one step away from radiation disaster,” he said in his nightly address.

President Joe Biden, in a telephone call with Zelensky, called for Russia to return full control of the plant and let in UN nuclear inspectors, the White House said.

Zelensky said earlier on Thursday he had spoken with Biden and thanked him for the United States’ “unwavering” support.

“We discussed Ukraine’s further steps on our path to the victory over the aggressor and importance of holding Russia accountable for war crimes”, Zelensky said on Twitter.

Earlier, Russian President Vladimir Putin signed a decree to increase the headcount of his country’s army to more than two million, including 1.15 million servicemen, from next January, according to the document published on a government portal.

Putin last set the army headcount in 2017 at around 1.9 million people with 1.01 million soldiers.

Ukraine state operator Energoatom said the Zaporizhzhiaplant was severed from the national network after a power line was twice disconnected by ash pit fires in an adjacent thermal power plant.

The three other power lines “were earlier damaged during terrorist attacks” by Russian forces, the operator said.

“The actions of the invaders caused a complete disconnection of the (Zaporizhzhia Nuclear Power Plant) from the power grid — the first in the history of the plant,” Energoatom added on Telegram.

It added that “start-up operations are under way to connect one of the reactors to the network”.

Kyiv officials have said they believe Moscow has seized the station in order to divert power to the Crimean peninsula annexed by Russia in 2014.

Energoatom could not be immediately reached for comment on whether the supply had been diverted, the cause of the ash pit fires, or the number of those without electricity.

However, the mayor of the city of Melitopol Ivan Fedorov said “Russian occupiers cut off the electricity in almost all occupied settlements of Zaporizhzhia”.

Meanwhile on Thursday the death toll from an air strike on a train station in central Ukraine rose to 25, as the EU warned those “responsible for Russian rocket terror will be held accountable”.

Russia issued a counter-claim saying it targeted soldiers and killed 200 Ukrainian servicemen in the attack Wednesday on a rail hub in Chaplyne city of the Dnipropetrovsk region.

The attack struck six months to the day since Russia began its invasion of Ukraine and also on the day Ukraine celebrated its 1991 independence from the Soviet Union.

On Thursday, state rail operator Ukrainian Railways said the toll had risen overnight from 22 to 25, and included two children with a further 31 people injured.

In a daily press briefing, Moscow’s defence ministry said the train was “en route to combat zones” in the eastern Donbas region of Ukraine, which Russia seeks to fully control.

The UN humanitarian coordinator for Ukraine Denise Brown said the strike “is just one more example of the level of suffering that this war is causing the people of Ukraine”.

Ukraine claimed Thursday to have repatriated 53 children it said were illegally taken to Russia for adoption but gave no details about the operation.