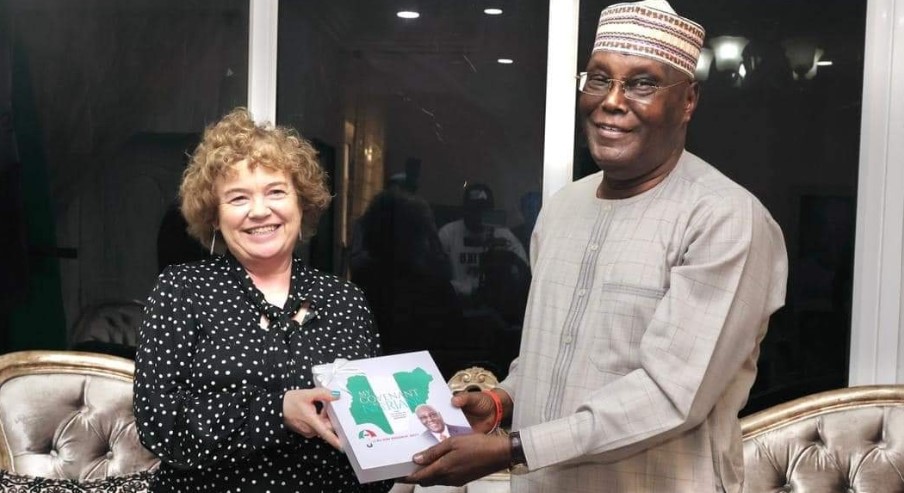 “I expect the UK to play a more active role for the survival of democracy in Nigeria.’’

Atiku Abubakar, the presidential candidate on the platform of the Peoples Democratic Party (PDP), says he is worried about the ongoing ASUU strike, promising Nigerian youths students’ loans if elected president in 2023.

He also called for increased collaboration between the UK and Nigeria on issues of mutual benefits. He made the call on Monday in Abuja when he hosted a delegation of the British high commission in Nigeria, led by High Commissioner Catriona Laing at his residence.

Mr Abubakar in a statement he personally signed said the meeting discussed a wide range of issues bordering on security, education, agriculture, economy and how to foster national unity in Nigeria.

“Bilateral ties between Nigeria and the United Kingdom have a rich history and it is important for both countries to leverage on that to promote issues that are of mutual concern,” explained Mr Abubakar. “I expect the UK to play a more active role for the survival of democracy in Nigeria.’’

Mr Abubakar thanked the delegation and expressed confidence that the 2023 presidential election in Nigeria would be free and fair.

He, however decried the worsening insecurity plaguing Nigeria, and solicited the UK’s assistance, especially in providing training and intelligence sharing.

On the economy, Mr Abubakar said if given the opportunity, he would, among other things, end multiple exchange rate regimes and reduce tax to encourage genuine manufacturers and promote real investments.

He also promised to boost agriculture to create employment for the country’s teeming population. In addition, the PDP presidential candidate expressed concern over the lingering ASUU strike and the rot in the education sector, promising to carry out reforms, including loan schemes for Nigerian students.

According to the statement, Ms Laing said the meeting was part of the ongoing engagement of the UK government to enhance democracy and credible elections in Nigeria.