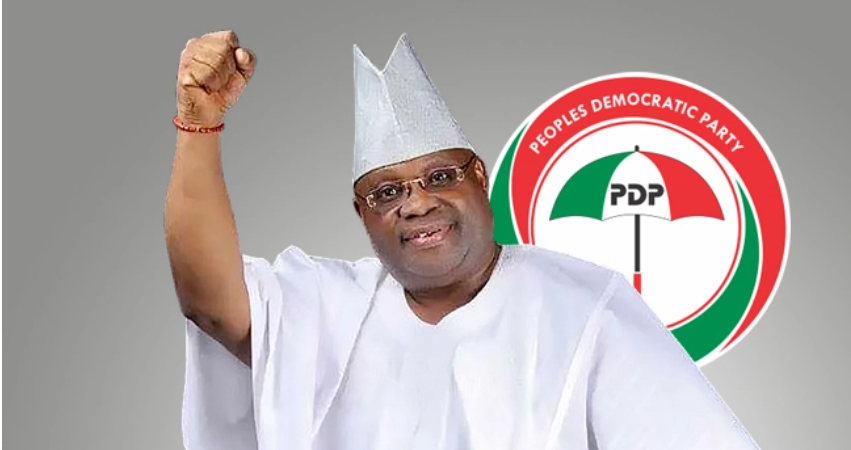 Nearly four years after failing, by a small margin, in his bid to govern Osun State, Senator Ademola Adeleke of the Peoples Democratic Party (PDP) has overcome the biggest obstacle to his dream.

On Saturday, he achieved a hard-fought victory over the state’s incumbent Governor, Gboyega Oyetola, of the All Progressives Congress (APC) in the state’s governorship election.

Senator Adeleke, 62, riding on the back of a campaign aimed at developing the state and retrieving what he says is his stolen mandate, secured 403,371 votes, 28,344 more than his closest rival, the incumbent governor. Governor Oyetola polled 375,027 votes.

It was enough for the Returning Officer of the election, Professor Oluwatoyin Ogundipe, to declare him winner and governor-elect.

“I declare that Adeleke Ademola Jackson Nurudeen of PDP, having satisfied the requirements of the law, is hereby declared the winner and he is returned elected,” Professor Ogundipe declared, sparking jubilation among Adeleke’s supporters.

Saturday’s election featured 15 contestants with the rematch of Oyetola and Adeleke drawing the most attention.

As the results from the local governments trickled in, it was clear that the election which was generally considered peaceful was a two-horse race between both men.

They split 96.76 per cent of the total valid votes cast in the election.

Kehinde Atanda of the Action Democratic Party (ADP) came in at a distant third with 10,104 votes, followed by Akin Ogunbiyi of the Accord Party with 4,515 votes. 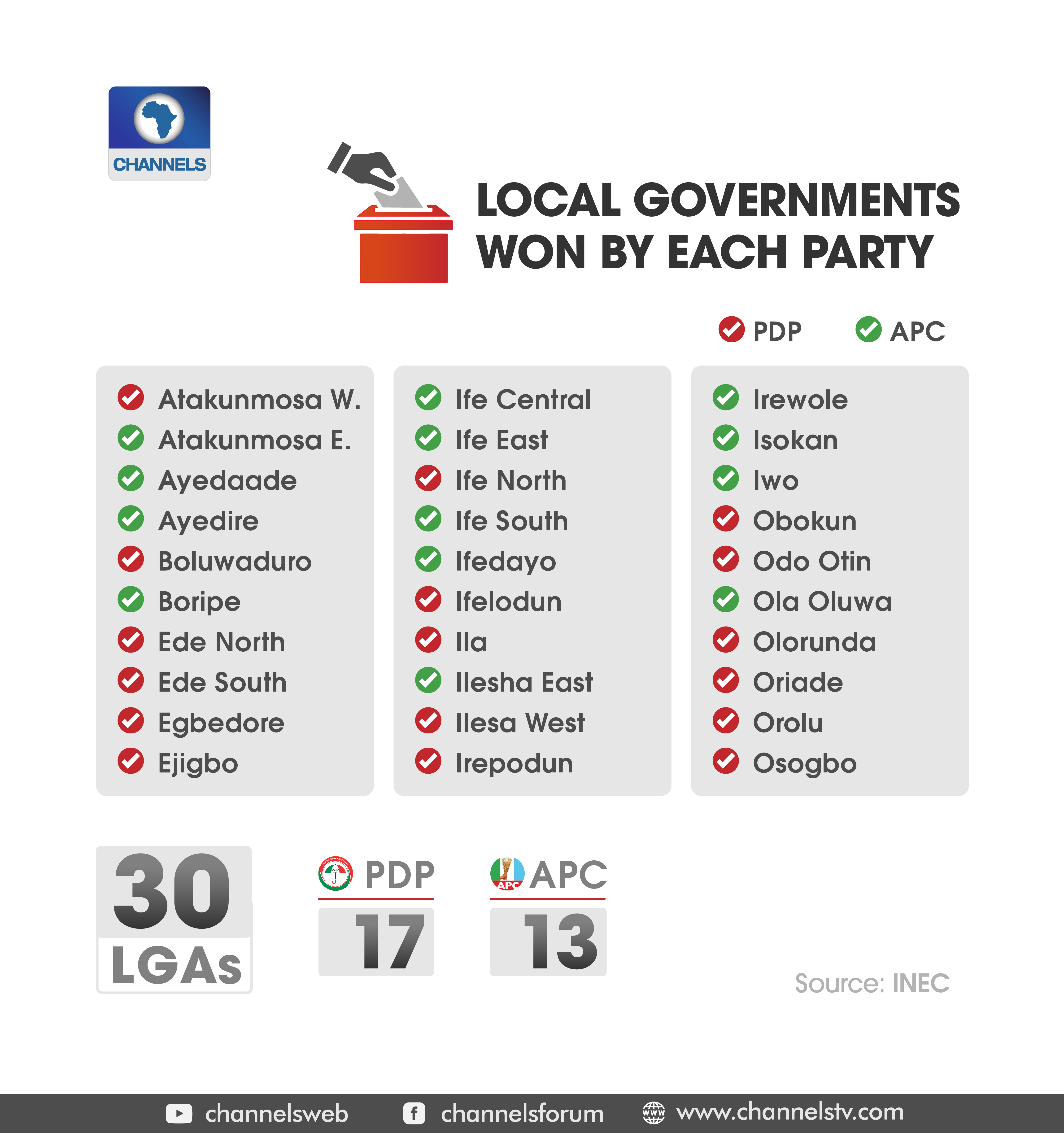 In the last governorship election held in 2018, it was a tough contest as the APC flagbearer had to win a supplementary election before he was returned elected.

Following the initial poll held that year, Oyetola trailed Adeleke who had led by 353 votes going into the supplementary election which held in seven polling units.

The votes garnered in the supplementary poll would later help the incumbent governor to overturn the deficit and put him ahead of his PDP counterpart, leading to his emergence as the winner of the keenly contested election.

According to the final votes announced by the electoral umpire that year, Oyetola polled 255,505 votes while Adeleke scored 255,023 votes – a difference of 482 votes. 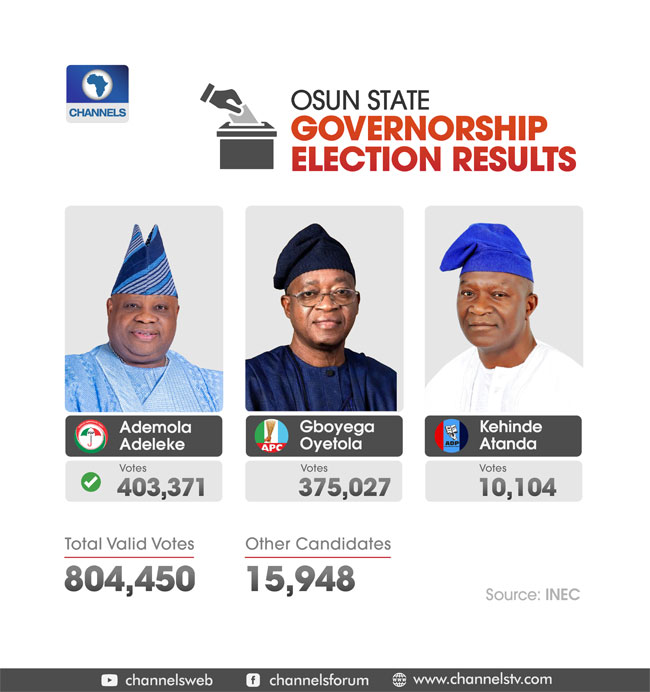 It was, however, victory at last for the PDP candidate and his supporters on Sunday (today) when he was returned elected by Professor Ogundipe who doubles as the Vice Chancellor of the University of Lagos (UNILAG).

Compared to his loss in the last election, Adeleke bounced back to defeat incumbent Governor Oyetola with a vote margin of 28,344.

Saturday’s election started off on schedule at many polling units observed with accreditation and voting going on smoothly for the most part.

Some of the candidates and observers also had words of praise for the conduct of the poll.

Governor Oyetola told reporters that he is satisfied with the conduct of the poll and commended the security operatives for “doing a very good job”.

“The whole thing has been very peaceful,” he said after voting at Unit 2, Ward 1 in Boripe Local Government Area.

“I think INEC has performed very well,” said PDP’s Adeleke after he voted. More than 21,000 policemen had been deployed for the exercise along with three police helicopters and three gunboats.

Ahead of the polls, there had been concerns about possible disturbances by cultists and the menace of vote-buying.

However, as the exercise progressed, reports from observers and security agents indicated that it was peaceful, backing up assurances by security operatives that adequate arrangements had been made for the poll.

“We’ve been able to make adequate arrangements to take care of the possible consequences of the activities of the cultists,” said the Deputy Inspector-General of Police in charge of the election, Johnson Kokumo.

“That is, effecting their arrest before the election and of course mopping up light weapons in circulation. This is intended to create a conducive atmosphere where the gubernatorial election will take place without crisis.”

Hours into the poll, the Director-General of the National Youth Service Corps, Brigadier-General Mohammed Fadah, adjudged the poll peaceful.

“The place is more peaceful than Ekiti because there isn’t any report of violence,” he told Channels TV’s Seun Okinbaloye when asked about the poll in Osogbo, the state capital.

“Everybody is peaceful like it’s Sallah day, everywhere is peaceful and they are doing their thing in a very peaceful manner. There is no negative report so far.”

In a preliminary report, the Civil Society Situation Room also adjudged the election as peaceful.

“From the Situation Room’s observations, no violence has been recorded and the number of people who came out was encouraging,” it said in another assessment report – the second for the day.

“We commend the people of the State of Osun for coming out early to cast their votes, especially the elderly who waited in queues patiently.”

When it came to vote-buying, however, the steps taken to combat the act fell short.

“There was open negotiation of buying and selling of votes well-coordinated by the polling agents in many of the polling units,” the Civil Society Situation Room said in its assessment of the election.

“There were no complaints from any of them (the polling agents) against each other. Codes were used to extract commitments from voters as opposed to the blatant money exchanging hands observed in the Ekiti State governorship election.”

Candidates also had concerns about vote-buying.

The governorship candidate of the Accord Party, Akin Ogunbiyi, told journalists that he witnessed vote buying in Aiyedire Local Government Area.

Shortly after casting his vote with his wife at Ile-Ogbo Ward 1, Unit 1, Methodist Primary School, Ogunbiyi listed other areas where vote-buying took place to be in Ile-Ogbo and Osogbo environs.

He lamented that there was no official of the Economic and Financial Crimes Commission (EFCC) there to arrest party agents who trade votes for money.

“The police officers there can’t do any arrest. They were sitting down. In fact, it was by their side that they (voters) were going to collect money for the vote that they sold,” Ogunbiyi said.

“An Aiyedire Local Government, there was a vehicle parked behind a building. There was a lady inside and there was another man. They were the ones who were exchanging cash for votes.”

The candidate of the Labour Party, Lasun Yusuf, also had concerns about vote-buying.

After voting at his polling unit in Irepodun LGA around 10:20 am, he had a warning for voters.

“I just have fears for the future generation but let me sound a note of warning, if people actually go out today to buy the votes, Nigeria is in problem,” he said.

Ahead of the polls, INEC had said it would work closely with security operatives on the issue of vote-buying. As part of efforts to tackle the menace, various security agencies were present in the state for the poll, including the EFCC.

“We have our Force Intelligence Bureau operatives; our tactical operatives are here too. They are not in uniforms, they are everywhere, and we are working with the Economic and Financial Crimes Commission (EFCC),” Police Public Relations Officer, Muyiwa Adejobi, told Channels TV during the polls.

The EFCC would later arrest three men for vote buying.

According to the anti-graft agency, the three suspects were arrested through actionable intelligence and digital means, and all three will be prosecuted.