Ekiti Guber Candidates Sign Peace Accord Ahead Of Poll 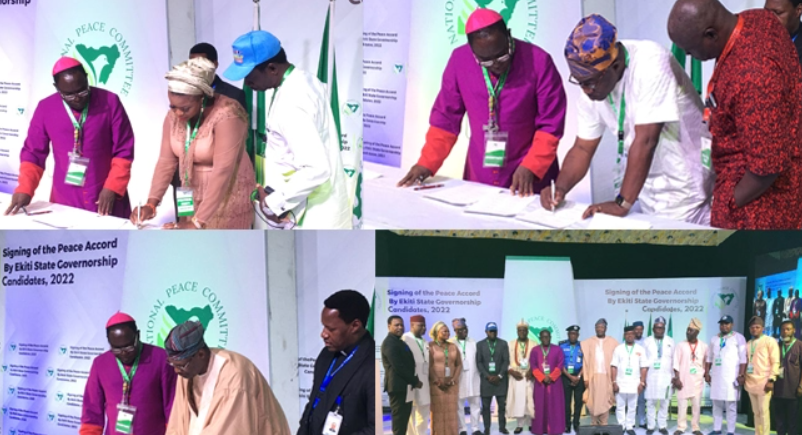 They signed the Peace Accord at an event held in Ado-Ekiti under the auspices of the National Peace Committee (NPC) led by a former Head of State  General Abdulsalami Abubakar (GCFR), who was represented by the Catholic Bishop of Sokoto Diocese, Most Rev. Matthew Hassan Kukah.

The accord was signed by the eleven candidates vying for the post.

During the event, the Chairman of the Independent National Electoral Commission (INEC) Prof. Mahmood Yakubu expressed gratitude to the NPC for the initiative, saying it has been fruitful.

The INEC boss reiterated the commission’s resolve to work with stakeholders to ensure peaceful polls across the country and urged the candidates to take the Peace According Initiative seriously.

“The truth is that the Peace Accord is not an automated, self-actualising process. Let me, therefore, call on all political parties & candidates to abide by the letter & spirit of the Accord by appealing to our supporters to maintain peace before, during, and after the elections,” the INEC chairman added.

He also assured residents of the state of a free and fair election on Saturday, restating that the electoral body has put all modalities in place for a hitch-free exercise.

“The success of the Peace Accord rests on three pedestals: the political actors, INEC, and security agencies. Speaking for INEC, I wish to assure the Peace Committee of our commitment to transparent and credible elections.

“Working for the last 12 months since June 2021 when we released the Timetable for the #EkitiDecides2022 election, it is inconceivable that INEC will undermine itself, especially on Election Day & beyond. I want to assure you all that the votes of the Ekiti people will count,” Prof Mahmood added.