Flood Kills 50, Displaces Many In Jigawa 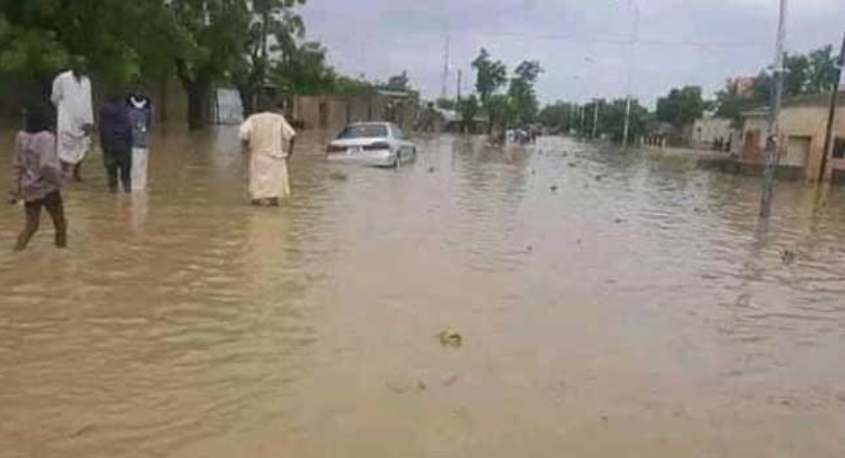 Fifty people have died with many displaced as flood ravages parts of Jigawa State, authorities said on Saturday.

He stated that the situation forced Jigawa residents to take refuge in other places, which include government buildings.

Some of the victims are drawn from Balangu village where no fewer than 237 houses were destroyed with four people dead.

“We have so many displaced persons about 11 temporary camps. In Balangu alone 237 houses have been damaged and they are now living in a temporary camp,” Yusuf said.

“Four people also died in that same village, after the six in Kafin Hausa. So, when you go around the state we lost about 50 people to the flood now. Even yesterday, seven people from the same family died.”

As part of the Federal Government’s intervention efforts, the Minister of Humanitarian Affairs, Sadiya Umar, visited the North-Western state to distribute relief materials.

She was in the state alongside the Director General National Emergency Management Agency (NEMA), Mustapha Habib, to provide succour to the victims.

The Minister said her mission to the state was based on President Muhammadu Buhari’s directive to provide the necessary support to the flood-ravaged victims.

“This incident is particularly sad because it has become perennial. This is causing serious damage to schools, houses, and the livelihood of the people,” Umar said.

“Upon receiving this unfortunate news, President Muhammadu Buhari directed the Ministry of Humanitarian Affairs and Disaster Management to activate the National Emergency Management Agency to respond and provide the necessary support to the affected persons.”

In his remarks, the Jigawa State Governor, Badaru Abubakar, commended the Federal Government for what he describes as a quick response to the incident.

He lamented the flooding situation, saying it has caused so much trauma to the victims. The governor is hopeful that the government’s intervention will cushion the effect on the people.

“The latest incident happened four to five days ago and already relief materials are on the ground. We have seen the kind of support we received during the COVID-19 pandemic and all afflictions. You are always apt and on time to support our people. We can’t thank you enough,” the governor said.