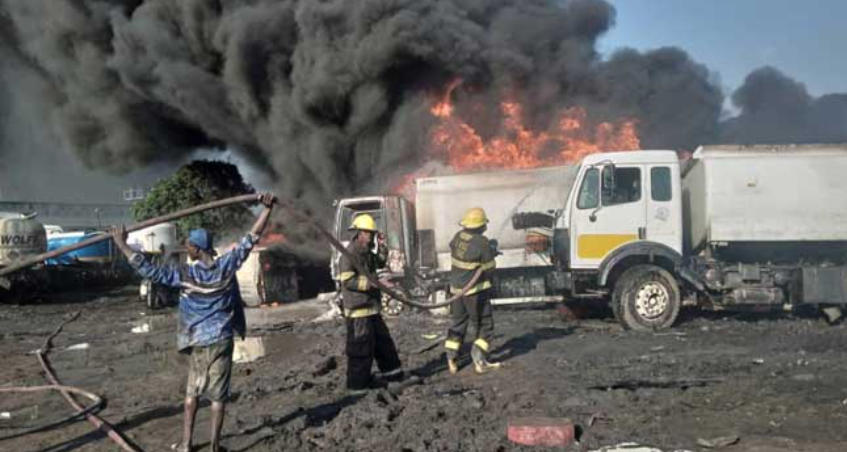 A tanker laden with diesel has exploded in Lagos, destroying several vehicles in the Otto wharf, Mile 2 area of the state.

The incident was said to have occurred on Tuesday afternoon at an articulated vehicle motor park in the community.

In viral video clips obtained by Channels Television on Wednesday, several vehicles could be seen burning as fire service officials battled the inferno.

The Permanent Secretary of the Lagos State Emergency Management Agency, Dr Olufemi Oke-Osanyintolu, confirmed the incident via a statement, saying the agency activated its response plan after receiving a distress call to the incident.

“Upon arrival at the scene by the agency response team, a fire outbreak from a fuel tanker and drums was encountered. LRT, LRU FIRE alongside LAGS FIRE and FED FIRE are currently battling the inferno to contain it,” he said.

According to Oke-Osanyintolu, all stakeholders were on the ground to stop the fire from spreading further.

Taking to his Twitter handle on Tuesday, he shared pictures showing emergency officials responding to the situation.

“The Lagos State Fire and Rescue Service is presently combating intense Fire at an articulated Motor Park, Otto Wharf, Mile 2, Lagos which resulted from a tanker carrying diesel that exploded and resulted in inferno reported at 3:44 pm,” he stated.

Tanker explosions is not new to the nation’s commercial capital as trucks carrying fuel usually ply the road.

Officials of the National Emergency Management Agency (NEMA) who confirmed the incident explained that the tanker was conveying 45,000 litres of petrol before it crashed and spilled its content on the road.

See photos from the scene below: