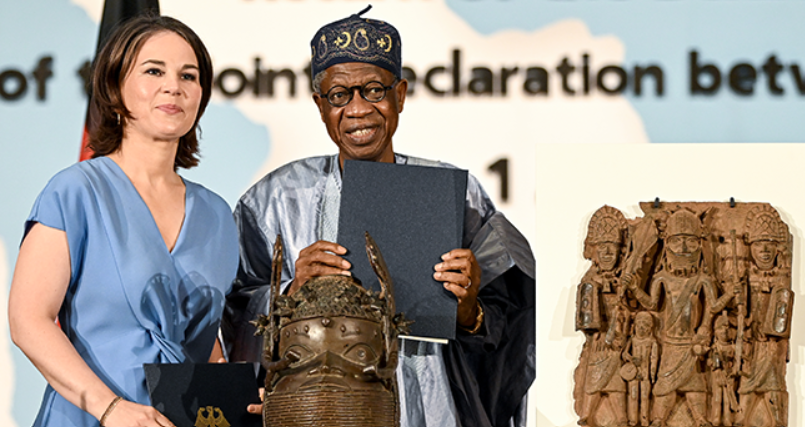 Germany signed an agreement on Friday to begin sending hundreds of Benin bronzes back to the Federal Government, rubber-stamping the biggest effort yet by a European country to return the looted artworks.

Foreign Minister Annalena Baerbock and Culture Minister Claudia Roth signed the deal with their Nigerian counterparts in Berlin after Germany first announced that it would begin returning the bronzes last year.

Minister of Culture, Lai Mohammed, thanked Germany for having “taken the lead in correcting the wrongs of the past”, hailing “the dawn of a new era of cooperation”.

“This will go down as one of the most important days in the celebration of African cultural heritage,” Minister of State for Foreing Affairs, Zubairu Dada added.

The first two artworks — the head of a king and a plaque depicting three warriors — were on Friday handed over to representatives from Nigeria.

“Today we have reason to celebrate, because we have reached a historic agreement — the Benin bronzes are returning home,” Baerbock said.

“These pieces are not only magnificent artefacts — they are some of Africa’s greatest treasures. But they are also telling a story of colonial violence,” she said.

Thousands of Benin bronzes, metal plaques and sculptures that once decorated the royal palace of the Kingdom of Benin are now scattered around European museums after being looted by the British at the end of the 19th century.

The biggest collection is held by the Ethnological Museum in Berlin, which has 440 — considered the most important collection outside London’s British Museum.

Negotiations are still ongoing as to which of the bronzes held by the Ethnological Museum will be returned to Nigeria, and which will remain in Berlin on loan.

Nigeria has been negotiating the return of Benin bronzes from several European countries and plans to build a museum in Benin City in southern Edo state, where it hopes to house them.

France in November handed back 26 of the treasures, while two were returned by Britain earlier this year, with talks ongoing for more to follow.