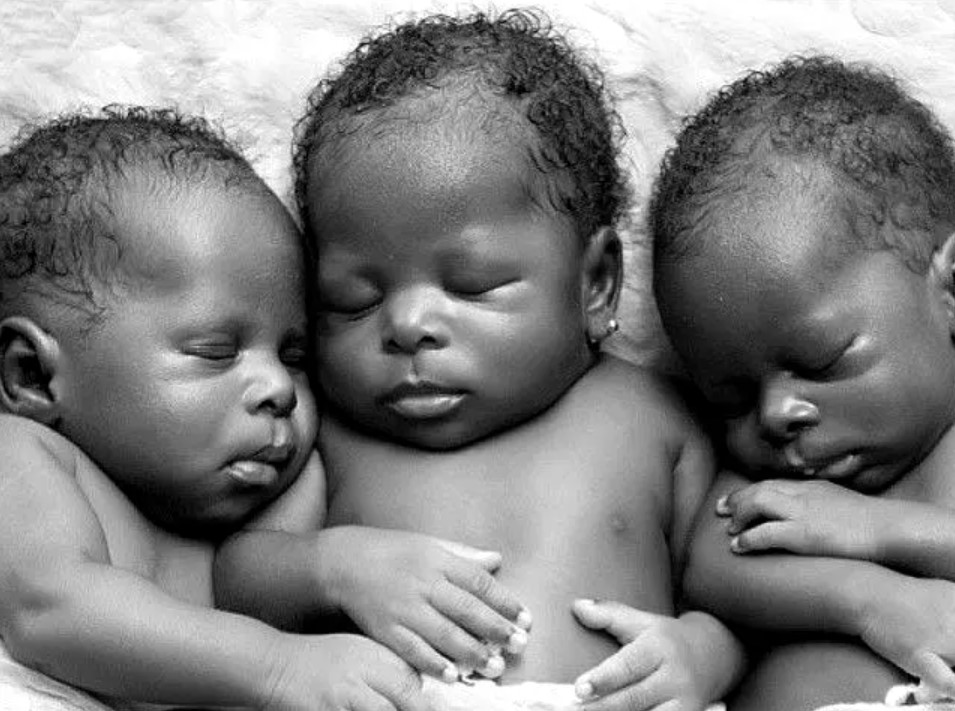 A commercial motorcyclist in Lagos, Waheed Nosiru, on Thursday, cried out over his inability to offset the sum of N250,000 being a hospital delivery bill for his wife Modinot, who gave birth to a set of triplets.

Waheed who lives in Igbo-Olomu, in the Agric area of Ikorodu, said the set of triplets, who arrived on Saturday, 23rd April 2022 was supposed to be a source of joy but with his present financial condition, he is finding it difficult to cope with the expenses after delivery.

The babies all girls were delivered at Beautiful Gate Hospital, Igbo-Olomu, Isawo, through ceasarian operation.
However, all efforts to raise fund to clear the sum of N250,000 hospital delivery bill and meet up with other expenses by the family have been knotty, for that, he had to seek help.

Speaking with our correspondent, he said his eight years old marriage was blessed with two boys ages seven and four before his wife was confirmed pregnant again.

According to him, he was doing well as a motor leather dutch auto technician before Covid-19 Pandemic set in which affected him adversely and he resorted to Okada business for survival.

The Okada rider who occupies a room apartment in Igbo-Olomu with his immediate family said to make ends meet, he bought a motorcycle on hire purchase to the tune of N310,000 which had been paid off unfortunately for him, it was impounded by men of Lagos State Taskforce who operated at Ikorodu Garage about two weeks ago making life to be unbearable once again.

Before the arrival of this bundle of joy, Nosimo was said to have worked as a freelance hairdresser in the neighbourhood.

To continue in business, Waheed said he got another motorcycle on hire purchase last Saturday, at the rate of N330,000 coincidentally, his wife was delivered triplets the same day.

”I had to return the motorcycle to avoid pilling up of debts but I am finding it difficult to meet up with daily expenses.
”I was disorganised on hearing scan results which revealed the anticipated arrival of a set of triplets and broke down with thoughts all over me but I doubled my efforts to change our accommodation our room was too small.

”I succeeded in pulling resources together to change the accommodation about four months ago but here we are.
‘I have stopped working since the arrival of the triplets in order to assist my wife in the hospital but this is quite tasking. Apart from other expenses to sustain the family, we need the sum of N250,000 to offset the delivery bill and money for drugs.

”I am an orphan from a poor background while my mother-in-law is presently under medical treatment and this is already gulping her finance,” said the father of five.

Asked why he did not register his wife for antenatal at the General Hospital, Ikorodu, he said, ”the location of the general hospital is far from Igbo-Olomu. When I considered the fares and stress of going there, l thought of saving her the stress and registered her at the private hospital which is a stone’s throw from our house.”

It was learnt that neighbours and well-wishers have raised the sum of N50,000 for the couple but this is too low compared with their immediate needs.
In his quest to get succour, Waheed said he has cried onto Child Protection Network CPN, Lagos State, which has been soliciting financial support for the family but this has not yielded at press time,

However, as at the time our correspondent contacted Mr Oseni Razak, the Deputy Head of Rescue, Child Protection Network CPN, Lagos State, he said, ”the family has been sustained individually with N50,000 being a deposit for the hospital delivery bill but the mother is still in the hospital due to unavailability of the fund.

”Feeding and daily expenses of the babies and their mother are other issues. Nigerians should please come to the assistance of this family.”