INEC Speaks on Accepting Lawan And Akpabio As Senatorial Candidates 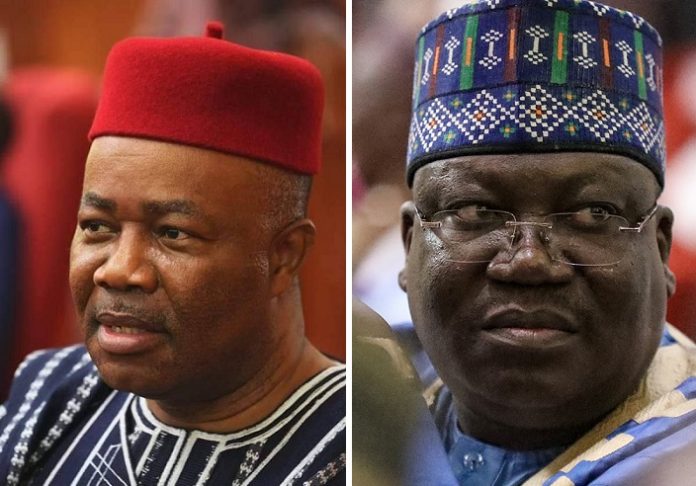 An online news platform recently claimed in its publication that the commission doctored and backdated documents to accommodate Lawan and Akpabio’s nominations.

Reacting, INEC in a statement on Tuesday, August 09, 2022, by National Commissioner and Chairman Information and Voter Education Committee, Festus Okoye, denied the report, stressing that it did not recognize any of the two as senatorial candidates.

“For the record, the commission has not recognized any of the two personalities as a senatorial candidate.

“We call for responsible reportage as against the unwarranted attack on the commission and its officials over a matter that can be easily fact-checked.”

The electoral body had rejected the nomination of the duo following controversies surrounding the primary elections of the ruling All Progressives Congress (APC) which purportedly produced them.

Akpabio had contested the presidential ticket of the All Progressives Congress (APC), but he withdrew from the race on June 7, and asked his supporters to back Bola Tinubu, a former Lagos State governor, who eventually emerged APC presidential candidate.

But somehow, his name was submitted to INEC as the senatorial candidate for Akwa-Ibom North-West.

A parallel primary election was conducted and won by Ekperikpe Ekpo. However, it was later cancelled over irregularities, while a rerun was conducted on June 8, with Akpabio declared as winner of the exercise.

What this means: This implies that the Senate president and Akpabio might have secretly obtained the nomination forms for the senatorial seat of their respective districts while also seeking a presidential ticket.

What the law says: The Resident Electoral Commissioner in Akwa Ibom State, Mike Igini, disclosed this while featuring on Channels TV, quoting Section 115 (D) of the Electoral Act, 2022.

“A person, who signs a nomination paper or result form as a candidate in more than one constituency at the same election, commits an offence and is liable on conviction to a maximum term of imprisonment for two years.”

Igini said by “constituency,” the electoral term refers to a separate election whether it is presidential, governorship, senatorial, the House of Representatives or that of state assembly.

He said any candidate who runs afoul of this law is liable to be jailed for two years, and that Section 115 (3) even states that an attempt to obtain multiple forms is an offence.