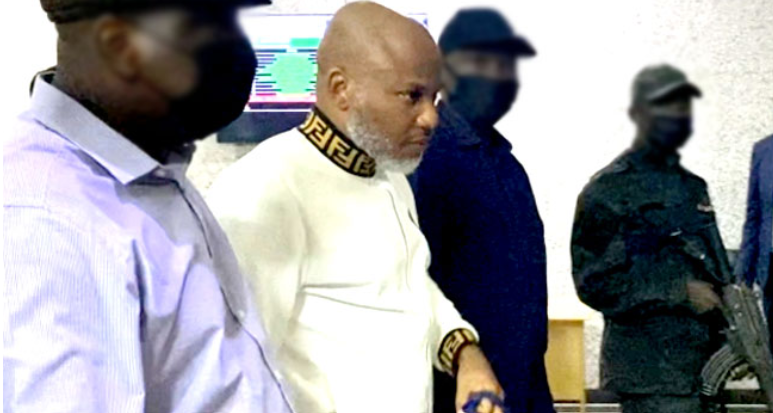 Leaders in the South East have appealed to President Muhammadu Buhari to release the detained leader of the Indigenous People of Biafra (IPOB), Nnamdi Kanu.

They made the plea on Friday at a meeting with the President who is on a two-day visit to Ebonyi State.

The Chairman of the Christian Association of Nigeria (CAN) in the South East, Reverend Father Abraham Nwali, made the plea on behalf of the South East leaders in his address at the Ebonyi State Stakeholders’ Forum held at the Government House in Abakaliki, the state capital.

“We plead for a political solution that as a father; a kind father, a forgiving father, to grant Nnamdi Kanu freedom,” he said. “We say that he should be granted pardon.

“And we call on all agitators to cease all forms of hostilities and rather demand a nation where the plights of the poor, the weak, the oppressed will be addressed.”

Kanu was first arrested in 2015 on charges bordering on terrorism, treasonable felony, managing an unlawful society, publication of defamatory matter, illegal possession of firearms, and improper importation of goods, among others.

He fled the country in 2017 after he was granted bail for medical reasons. Although he was later sighted in Israel, he was intercepted in June 2021 and repatriated to Nigeria – about four years since he jumped bail.

Since his return, the Nigerian government has re-arraigned the IPOB leader in court despite repeated calls for his release by stakeholders in the south-east region.

When his case resumed at the Federal High Court in Abuja on April 8, Justice Binta Nyak struck out eight of the 15 counts filed against him by the government.

The judge, while delivering a ruling on the validity of the charges, held that in the instant preliminary objection application, counts six, seven, eight, nine, 10, 11, 12, and 14 did disclose any offence by the defendant.

She, however, acknowledged that counts one, two, three, four, five, 13, and 15 showed some allegations against the IPOB leader, saying the trial of the defendant would proceed on those counts.