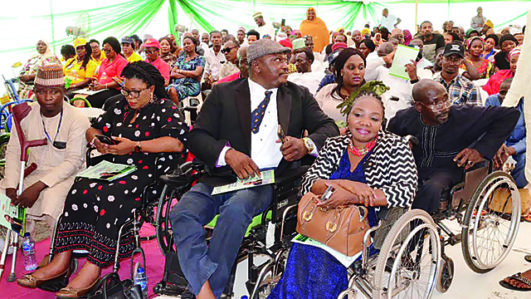 “The gesture is part of the state government commitment on inclusive provision of education to all categories of people, including people with disabilities.”

The Jigawa State Agency for Mass Education has opened a study centre for people with disabilities under its Literacy-by-Radio Programme.The agency’s executive secretary, Abbas Abubakar, announced this in Dutse on Tuesday.

Mr Abbas said the centre was opened in Aujara village in Jahun local government area and already, 25 PWDs had registered.

The programme was introduced by the government in 2021 for adult learners in order to boost the state’s literacy level.

He said the agency, however, decided to include persons with disabilities, vulnerable and disadvantaged people.

Mr Abbas said each of the new learners, comprising 20 men and five woman were given a solar-powered radio to participate in the programme.

The executive secretary added that though the PWDs centre was a pilot scheme, more centres would be open for such category of people across the state.

“The gesture is part of the state government commitment on inclusive provision of education to all categories of people, including people with disabilities, vulnerable and disadvantaged people in the state,” he stated. “The programme is aimed at eradicating illiteracy in the state, particularly among adults in rural areas.”

Mr Abbas also mentioned that the programme was aired in Radio Jigawa.

The programme was introduced to complement the efforts of the National Commission for Mass Literacy, Adult and Non-formal Education (NMEC) in boosting mass literacy in Jigawa.

In 2021, the NMEC supported the agency by donating 307 radios and other instructional materials as part of efforts to boost mass literacy in Jigawa.

”The advantage of the programme is that one radio teacher can reach more adult learners at once. These adult learners don’t have to go anywhere, they can learn in their locality,” he said.