President Muhammadu Buhari is currently holding a closed-door meeting with service chiefs and some members of his cabinet at the State House in Abuja.

While it is unclear what the agenda for the meeting is, many believe it is not unconnected to Tuesday’s attack on the Kuje Correctional facility and other security breaches experienced in recent times. 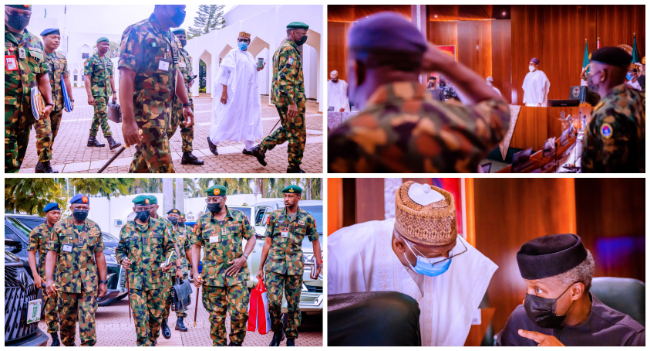 Following the attack on the Correctional Facility in Kuje, President Buhari expressed disappointment at the nation’s intelligence system.

Speaking after his visit to the Medium Security Custodial Centre, the president said, “I am disappointed with the intelligence system.

“How can terrorists organise, have weapons, attack a security installation and get away with it?” the president questioned.

Buhari, who, like most Nigerians was shocked by both the scale and audacity of the attack queried: “How did the defences at the prison fail to prevent the attack?

The president who was accompanied by Boss Mustapha, the Secretary to the Government of the Federation, Professor Ibrahim Gambari, the Chief of Staff, said that at the end of the visit, he was expecting “a comprehensive report” on the incident.