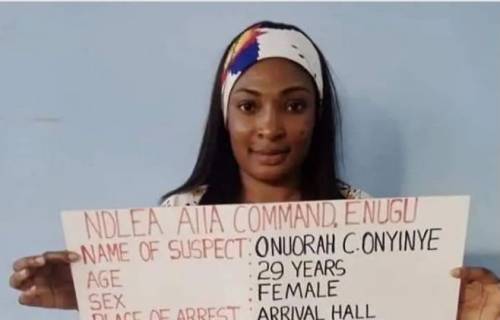 Onyinye, who was popularly known as Smart Beyonce and notorious for going braless was arrested at the Akanu Ibiam International Airport, Enugu on arrival on an Ethiopian airline flight from Addis Ababa

SaharaReporters reliably gathered the suspect was involved in drug trafficking with the suspended Deputy Commissioner of Police, Abba Kyari, who is standing trial for allegedly dealing in drugs.

A source told SaharaReporters on Tuesday that Onyinye used to give Abba Kyari $35, 000 every month to get drugs into Nigeria through Enugu state.

“She used to give Abba Kyari $35k every month to get drugs into Nigeria through Enugu state,” the source said.

It was gathered that the NDLEA operatives who had been trailing the suspect, upon her arrival thoroughly searched her luggage, which led to the discovery of 2.192 kilogrammes of cocaine concealed in two designer women’s handbags with false linings.

SaharaReporters also learnt that she got involved in drug trafficking after her friend took her abroad and showed her how to make illegal money.

An NDLEA operative who confirmed the arrest to SaharaReporters on condition of anonymity said that she had yet to name her sponsors.

Efforts made  to get the official reaction of the NDLEA were unsuccessful as the Head of Media and Publicity, Femi Babafemi did not answer his calls as his phone rang out.

Deputy Commissioner of Police, Kyari and Commander of the Intelligence Response Team (IRT) was arrested in February following his involvement with a drug cartel. He has since been suspended but is yet to be dismissed from the Force.

He was subsequently arraigned before an Abuja High Court and remanded in Kuje Correctional Centre in Abuja.

Kyari was first declared wanted by the NDLEA for selling cocaine consignment seized by IRT operatives from drug barons at the Enugu airport in January this year.

His involvement in the deal had raised questions in many quarters considering that he was under suspension last year because of his alleged involvement in fraudulent activities with Ramon Abbas, aka Hushpuppi who has already pleaded guilty to money laundering in the US.