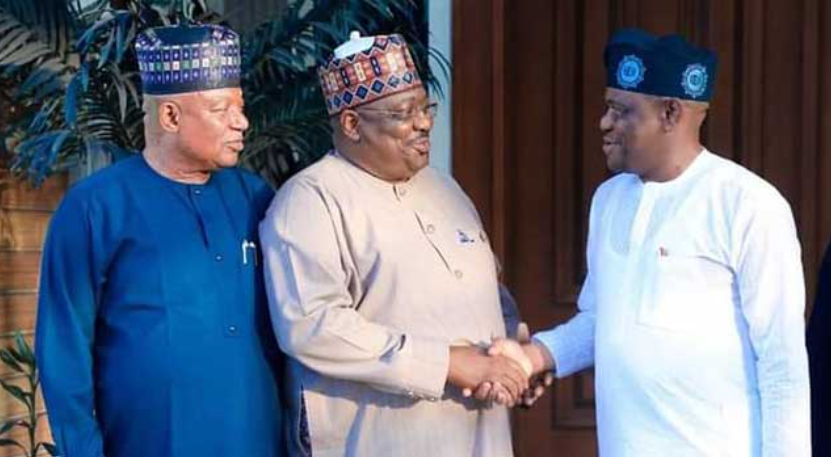 Senator Aduda who has been a long-time ally of Governor Wike was nominated as Minority Leader two days ago to replace the former, Enyinaya Abaribe who defected from the PDP.

Senator Barry Mpigi from Rivers State was on hand to receive the guests alongside Governor Wike.

The meeting was held behind closed doors in the private residence of Governor Wike in Port Harcourt.

The senators who arrived at about 3:10 pm, departed at about 6 pm, without stating the purpose of their visit.

The visit of the Senators happened a few minutes after the former Minister of Niger Delta Affairs, Elder Godsday Orubebe equally visited Governor Nyesom Wike at his residence.

Governor Wike had in the past days received top political figures at his private residence in Port Harcourt.

Some of whom have visited the Rivers State Governor include the Presidential Candidate of the Labour Party, Mr. Peter Obi, Governors Dave Umahi of Ebonyi State, and Bala Mohammed of Bauchi State.

Like the other visits, that of Elder Orubebe was also private.

Elder Godsday Orubebe who served in the Goodluck Jonathan administration, resigned his membership of the Peoples Democratic Party this week.

In his resignation letter addressed to the National Chairman of the Party, the former Minister said the present situation in the party does not inspire confidence that the party is ready to regain power in 2023 because the party disregarded its constitutional provisions and threw the zoning of the Presidency open, which created a situation that led to the emergence of a Northerner as the party’s presidential candidate, thus making the two topmost positions in the party, after the emergence of another northerner as the National Chairman.