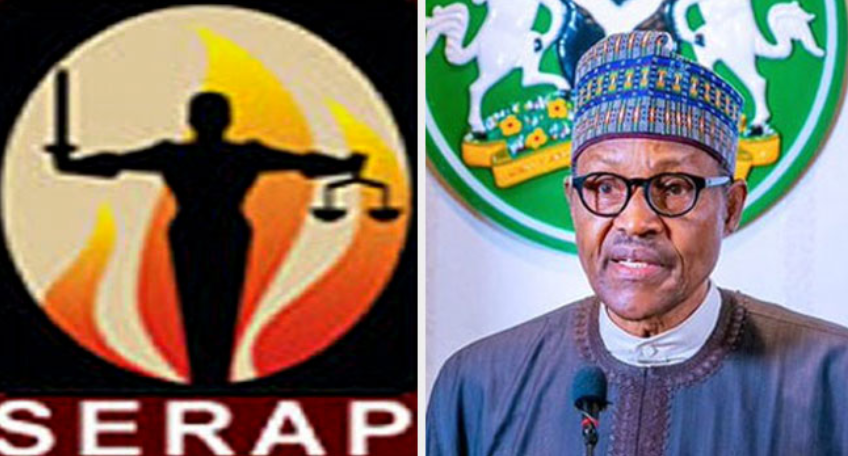 The Socio-Economic Rights and Accountability Project (SERAP) on Sunday said it has filed a lawsuit against President Muhammadu Buhari for imposing fines on media houses for allegedly glorifying terrorism.

SERAP also wants the court to “declare arbitrary and illegal the N5 million imposed on Trust TV, Multichoice Nigeria Limited, NTA-Startimes Limited and TelcCom Satellite Limited, over their documentaries on terrorism in the country.”

The suit which was co-filed by the Centre for Journalism Innovation and Development (CJID) has the Minister of Information and Culture, Lai Mohammed, and the National Broadcasting Commission (NBC) joined as defendants.

Channels Television had reported how NBC imposed the fines on the media house on the grounds that their documentaries glorified the activities of bandits and undermined national security, an act that contravenes the provisions of the Nigeria Broadcasting Code.

But the groups in suit number FHC/L/CS/1486/2022 filed last Friday at the Federal High Court, Lagos, SERAP and CJID are seeking: “an order setting aside the arbitrary and illegal fines of N5 million and any other penal sanction unilaterally imposed by the NBC on these media houses simply for carrying out their constitutional duties.”

“The NBC and Mr Lai Mohammed have not shown that the documentaries by the media houses would impose a specific risk of harm to a legitimate State interest that outweighs the public interest in the information provided by the documentaries,” a statement issued by SERAP Deputy Director, Kolawole Oluwadare, partly read.

“The documentaries by these independent media houses pose no risk to any definite interest in national security or public order.”

The plaintiffs stated that “It is inconsistent and incompatible with the Nigerian Constitution 1999 [as amended] to invoke the grounds of ‘glorifying terrorism and banditry’ as justifications for suppressing access to information of legitimate public interest that does not harm national security.”

It argued that the documentaries by the independent media houses are in the public interest, and punishing the media houses simply for raising public awareness about these issues would have a disproportionate and chilling effect on their work, and on the work of other journalists and Nigerians.

“The action by the NBC and Mr Lai Mohammed is arbitrary, illegal, and unconstitutional, as it is contrary to section 39 of the Nigerian Constitution, and international human rights treaties including the African Charter on Human and Peoples’ Rights, which Nigeria has ratified.”

The suit filed on behalf of the plaintiffs by their lawyers Kolawole Oluwadare and Ms Adelanke Aremo read in part: “A fine is a criminal sanction and only the court is empowered by the Constitution to impose it. Fine imposed by regulatory agencies like the NBC without recourse to the courts is unfair, illegal, and unconstitutional.”

“The grounds of ‘glorifying terrorism and banditry’ used as the bases for sanctioning the media houses are entirely contrary to constitutional and international standards on freedom of expression and access to information.”

“Imposing any fine whatsoever without due process of law is arbitrary, as it contravenes the principles of Nemo judex in causa sua which literally means one cannot be a judge in his own cause and audi alteram partem which means no one should be condemned unheard.”

“Under article 19(3), restrictions on the right to freedom of expression must be ‘provided by law’, and necessary ‘for respect of the rights or reputations of others’ or ‘for the protection of national security or of public order (ordre public), or of public health and morals’”

“Although article 19(3) recognizes ‘national security’ as a legitimate aim, the Human Rights Council, the body charged with monitoring implementation of the Covenant, has stressed ‘the need to ensure that the invocation of national security is not used unjustifiably or arbitrarily to restrict the right to freedom of opinion and expression.’”

“The grounds for imposing fines on these independent media houses fail to meet the requirements of legality, necessity, and proportionality.”

“The requirement of necessity also implies an assessment of the proportionality of the grounds, with the aim of ensuring that the excuse of ‘glorifying terrorism and banditry’ and ‘national security’ are not used as a pretext to unduly intrude upon the rights to freedom of expression and access to information.”

The plaintiffs are also seeking the following reliefs:

A DECLARATION that the act of the Defendants imposing a fine of Five Million Naira each on the independent media houses is unlawful, inconsistent with, and amounts to a breach of the principles of legality, necessity, proportionality and therefore a violation of the rights to freedom of expression, access to information, and media freedom;

A DECLARATION that the use of the Broadcasting Code by the NBC to impose sanctions on the independent media houses for an alleged infractions without recourse to the court constitutes an infringement on the provisions of sections 6[1] & [6][b] and 36[1] of the Nigerian Constitution 1999 and Articles 1 and 7 of the African Charter on Human and Peoples’ Rights and Article 9 of the International Covenant on Civil and Political Rights to which Nigeria is a state party;

A DECLARATION that the provisions of the National Broadcasting Commission Act and the Nigeria Broadcasting Code which are arbitrarily being used by the Defendants to sanction, harass, intimidate and restrict the independent media houses are inconsistent and incompatible with sections 36[1], 39 and 22 of the Nigerian Constitution, Article 9 of the African Charter on Human and Peoples’ Rights and Article 19 of the International Covenant on Civil and Political Rights and are null and void to the extent of their inconsistency and incompatibility;

A DECLARATION that the Defendants lack the legal power and authority to impose penalty unlawfully and unilaterally, including fines, suspension, withdrawal of license or any form of punishment whatsoever on the independent media houses for promoting access to diverse opinions and information on issues of public importance;

AN ORDER OF COURT setting aside of the fine of Five Million Naira imposed by the Defendants, through the 3rd Defendant, each on Trust TV, Multichoice Nigeria Limited, TelCom Satellite Limited (TSTV) and NTA-Startimes Limited for televising the documentary by the British Broadcasting Corporation “BBC Africa Eye” titled “Bandits Warlords of Zamfara”;

AN ORDER OF PERPETUAL INJUNCTION restraining the Defendants or any other authority, persons or group of persons from unlawfully shutting down, imposing fine, suspension, withdrawal of license or doing anything whatsoever to harass and intimidate or impose criminal punishment on the independent media houses or any of Nigeria’s journalists and media houses for promoting access to diverse information on issues of public importance;

No date has been fixed for the hearing of the suit.