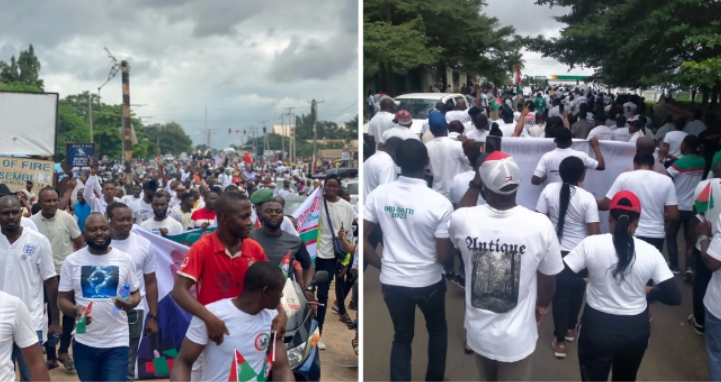 Supporters of the Labour Party’s presidential candidate, Peter Obi, on Saturday held a rally in Rivers and Benue State.

In Port Harcourt, Obi supporters trooped out in their numbers for what they tagged a ‘two-million-man march’ to rally support for their candidate.

The ‘Obi-dients’, as they are called, defied the heavy downpour, marching from Eleme to Isaac Boro park, suspending vehicular traffic in the process.

The group was addressed by Nollywood actress, Hilda Dokubo, who repeated the ‘Obi-dient’ slogan of ‘We no dey give shishi, we no dey collect shishi’, to the excitement of the crowd.

A similar scenario played out in Makurdi, the Benue state capital, where one of the ‘Obi-dient’ leaders spoke on why they are mobilising support for Labour Party ahead of the 2023 general elections.

“We are watching as Port Harcourt, Auchi, Makurdi and Afikpo move OBIdiently today, under the sun and in the rain,” Mr Obi himself wrote on Twitter, acknowledging the rallies.

“Constitutional rights to peaceful assembly are protected and must be respected by all. Our labours will never be in vain. I appreciate you all.”