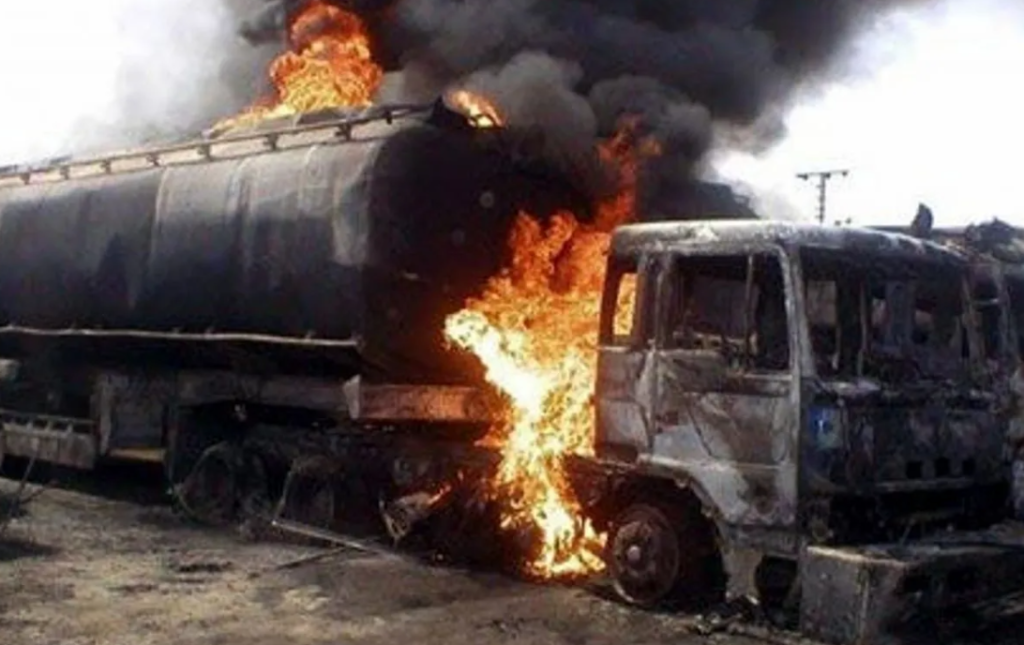 “The fire of the crashed tanker resulted in the burning of two other trailers (articulated vehicles) and a Dyna pickup van on the road,” a Kogi FRSC official says.

No fewer than three persons were burnt to death while two others were rescued with burns on Monday evening when a diesel tanker exploded in Kogi.

Corps Commander Stephen Dawulung of the Federal Road Safety Corps (FRSC) in Kogi, who confirmed the incident to the News Agency of Nigeria (NAN) in Lokoja, said it occurred at Felele quarters on the Lokoja-Kabba road around 8.17 p.m. of Monday.

Mr Dawulung said the ill-fated tanker conveying flammable material (diesel) burst into flames after a crash which resulted in the death of three persons.

“The fire of the crashed tanker resulted in the burning of two other trailers (articulated vehicles) and a Dyna pickup van on the road.

“Three persons were burnt to death while two other victims were rescued with burns and rushed to Federal Medical Centre, Lokoja for medical attention and the corpse deposited at the mortuary, ” the sector commander said.

The FRSC officer explained that the crash resulted from dangerous driving by the driver, who suddenly lost control, crashed and was totally burnt.

Unfortunately, the Dyna pickup van that was parked by the roadside and the two other vehicles were affected by the fire.

At that point, traffic became a standstill due to the magnitude of the fire until it subsided, making operatives of FRSC to conduct traffic control and clear the hold-up.

Mr Dawulung, who described the incident as very unfortunate and sad, advised drivers of articulated vehicles, especially those carrying flammable substances, to always be cautious and drive within the regulated speed limit.

“They (drivers) must also maintain all vehicle safety protocols like the use of safety valves to prevent spillage of content in the event of crash.”

The commander, however, directed a full investigation of the crash and sympathised with the families of those who lost their lives in the incident.