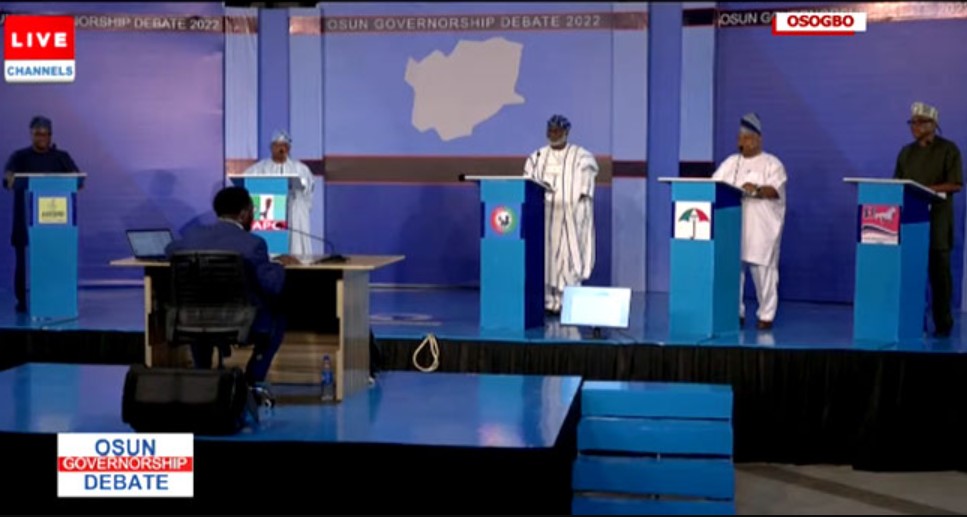 Five aspirants slugged it out on Sunday in Osogbo during a debate ahead of the Osun state governorship election, which is slated for July 16.

The candidates include Oyegoke Omigbodun of the Social Democratic Party (SDP), Ademola Adeleke of the Peoples Democratic Party (PDP), Yusuf Lasun of Labour Party, Adegboyega Oyetola of the All Progressives Congress (APC) and Akin Ogunbiyi of Accord party.

Some of the major talking points of the debate centered on tackling insecurity and improving the state’s economy.

Adeleke raised the issue of the state’s helicopter but incumbent Oyetola said the helicopter was at the repair shop where it could cost $300,000 to repair; he denied that it had been sold off.

Ogunbiyi (Accord) argued against arming state agencies like Amotekun but Oyetola said such a move could help improve security.

The candidates also differed on the state of infrastructure in Osun. Oyetola defended his administration’s record but Ogunbiyi and Adeleke faulted his statements.

Lasun (Labour) criticised politicians for instigating electoral violence. On policy, he called for a better tax regime and advocated for government to become more active in business.