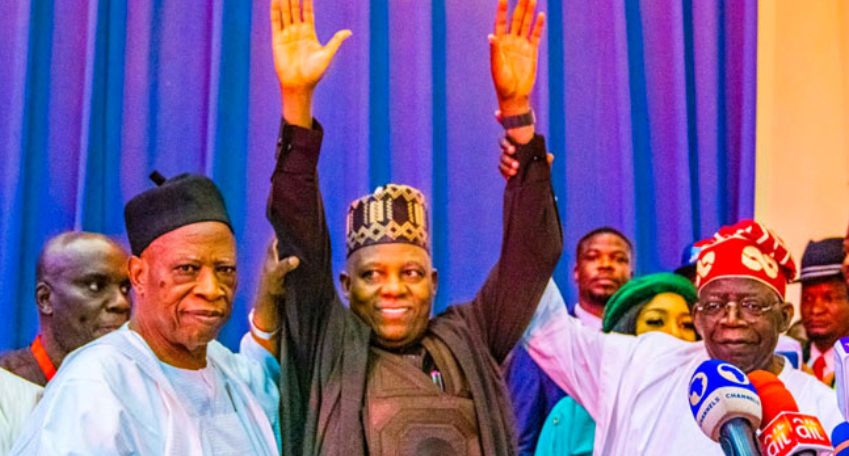 The All Progressives Congress (APC) has unveiled former Borno State Governor, Senator Kashim Shettima as its vice presidential candidate for the 2023 general elections.

The event, which is ongoing at the Shehu Yar’adua center in Abuja, has in attendance the party’s presidential candidate and ex-Lagos State Governor, Bola Tinubu, APC National Chairman, Abdullahi Adamu, and other chieftains.

In his remark, Adamu described the APC presidential candidate as a detribalized Nigerian who has carried everyone along irrespective of their ethnic and political differences.

He commended Tinubu for his choice of Shettima, thus following the path of the presumed winner of the 1993 presidential election, Moshood Abiola who picked Babagana Kingibe as his running mate.

Extolling the virtues of the ex-Lagos State Governor, the APC Chairman said Tinubu can be trusted to run an all-inclusive government if elected as President in the 2023 general elections.

“The 1993 presidential ticket and the current one bridged one of our fourth lines in the management of our adversities. Nigerians overwhelmingly voted for that ticket because they trusted Abiola – a man who opened his arms to every tribe and religion in this country,” Adamu stated.

“Asiwaju Bola Ahmed Tinubu is a man who has also thrown his arm around every tribe in Nigeria. He has offered his shoulders for those in pain to lean on. He has used his wealth to bring succour to the needy.

“He can be trusted to run an inclusive government in which character, competence and vision matter to his administration.”

Also speaking, Tinubu said he is grateful for the endorsement of the APC chieftains as the party’s vice presidential candidate.

According to him, every election affords the opportunity to bring hope to millions of Nigerians, promising that if elected, there will be a turnaround of things for the overall good of the masses.

Tinubu said he widely consulted before deciding to pick Shettima as his running mate for the 2023 general elections.

“Much has been said, written about my decision to select Shettima to partner me on this journey. As a committed and progressive leader, I have read and listened to all that has been written and said. It has been an emotional situation for me.,” Tinubu stated.

“Out of many competent Nigerians and out of many advice, I know it has to be my decision. And the hallmark of leadership is taking a decision at the right time when it ought to be taken.

“I did consult and I am proud to see all of you here acknowledging the quality of our Vice President Kashim Shettima.”

Tinubu had on July 10, announced the lawmaker representing Borno Central Senatorial District as his running mate, following the resignation of Ibrahim Masari, who served as a ‘placeholder”.

The announcement of Shettima has generated a lot of outcry from different quarters, just as it has received support from others.

While Tinubu is a Muslim from Lagos, the South-Western region of the country, Shettima is also a Muslim from the North-Eastern part of Borno.

The ruling party had received backlash from concerned Nigerians, religious leaders, opposition parties and the Christians Association of Nigeria.