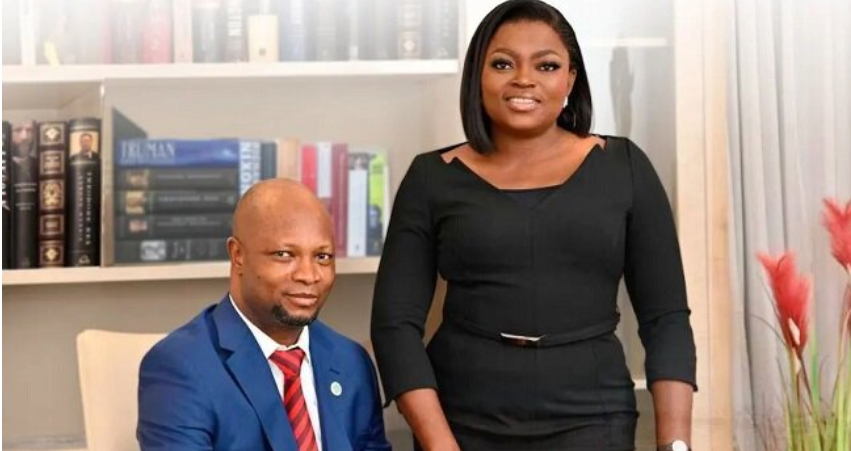 The governorship candidate of the Peoples Democratic Party (PDP) in Lagos State, Olajide Adediran, has announced popular actress Funke Akindele as his runninmate for the 2023 general elections.

Adediran, fondly called Jandor, unveiled the Lagos-born actress on Tuesday as the duo staged a rally alongside supporters across the streets in the Ikorodu area of the state.

Jandor, who also announced the choice of Akindele as the PDP deputy governorship candidate in a series of tweets, urged the residents of Lagos to work with them.

Stressing that the actress would add more value to his candidacy, he explained that he took the decision based on the clear understanding of the task ahead and the need to work with a co-visionary with shared passion for the emancipation of the good.

According to the PDP flagbearer, the journey demands focus, resilience, and tenacity, and Akindele is large-hearted with a well-known history of service and advocacy.

He also described his running mate as ‘an Ikorodu-born success story’ who has positively transformed the society through several of her projects.

Read the tweets by the PDP deputy governorship candidate below:

Hello Lagosians! I am quite pleased to share some exciting news with you that concerns our shared interest in making our beloved city and its residents greatly flourish. 2022 is a very important year for every resident of this great state.

It marks the eve of our collective autonomy from avoidable hardship; where we must put our all into freeing ourselves, via the ballot, at next year’s general elections. Alongside a group of eager progressives, I am doing my part in “working the talk”.

Starting with the en masse movement of the Lagos4Lagos members from the ruling party to the PDP, to my emergence as the party’s flagbearer and gubernatorial candidate for Lagos– having participated in the internal democracy that exists within the party.

Since starting this journey seven years ago, I have pledged my total commitment to the crusade of transforming the state of Lagos from her touted wealthy status on paper, to that in which the residents’ standard of living is at par with the state’s wealth and resources.

Most of these concerns really don’t require rocket science to fix. What they do require is an emotionally intelligent, listening and sensitive government. Undoubtedly, Lagos needs a breath of fresh air.

Our agenda is tailor-made to ease some of these burdens holding us hostage. As the face of new governance in Lagos, I will implement people-oriented policies via our carefully crafted T.R.E.A.T to the residents of Lagos.

– A Tech-driven approach to Governance

To all Lagos PDP Members, I say a very big thank you for trusting me with the flag of our party, I promise to fly this with all my God-given efforts and deliver our state from the stranglehold of our oppressors.

To those who also aspired for positions but didn’t get them, I commit to run an all-inclusive government right from the campaign council till we form our cabinet in 2023.

I appeal to the entire populace to work with me and my running mate, who will add more value to my candidacy. My choices running mate is from the clear understanding of the task ahead and the need to work with a co-visionary with shared passion for the emancipation of the good

This journey demands focus, resilience and tenacity. My running mate is someone who is large-hearted with a well-known history of service and advocacy. An Ikorodu born success story who has, through several of her projects, positively transformed our society.

I am proud to present Barrister Olufunke Ayotunde Akindele as my running mate and the Deputy Governorship candidate of the People’s Democratic Party in Lagos for the 2023 general elections. Together, we will serve and offer you a breath of fresh air.

Above all, what we desire is your action. Do everything possible to be eligible to vote next year, get your PVCs and encourage everyone around you to do the same. Stand with us on our mission to rescue Lagos State from the misrule of the current ruling party.

I am Dr. Abdul-Azeez Olajide Adediran (Jandor)​, running for the office of the Executive Governor of Lagos State. ​​​​It is time.