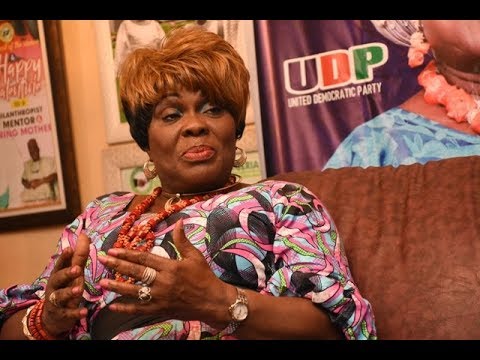 Vanguard gathered that Jackie Kassim stepped down her candidature to allow peace reign within the party in the state.

Source close to the female governorship candidate disclosed that her stepping down may not be unconnected with some political realignment currently going within the party nationwide to enable NNPP win elections in all the states where it fields candidates.

Jackie Kassim, however, denied the statement credited to the Ogun State Chairman of the party, Sunday Oginni that she was disqualified for emerging as a factional candidate.

She said, “I am the only qualified governorship candidate on the platform of NNPP that obtained the nomination form as well as paid all stipulated dues. All other so-aclaimed candidates were mere dummy aspirants, who never meet up with criteria set down that would have enabled them qualified for the contest”.

“But because of some clandestine moves by some personalities, which I considered would be inimical to the overall progress of the party and have the tendencies of affecting the fortunes of the party in the forthcoming general elections, I consider it exigent and in the spirit of sportsmanship, to sacrifice my guber ambition in the interest of the party, particularly when the purpose of the contest is to serve humanity in my state and in Nigeria as a whole”.

Dr. Jackie Kassim emphatically stated that she would still remain the authentic guber candidate of NNPP untill certain conditions are met before she finally withdraw her candidature.

This according to her, is in accordance with the terms reached between her and the national leadership of the party in the efforts at repositioning the party in Ogun State.

She however, appealed to all her supporters, including the Iyadunni Campaign Movement across the 20 local government areas of the state, as well as other elders and other loyal members of NNPP to remain calm and join hands with the leadership of the party in the state towards ensuring that NNPP emerge victorious in the forthcoming general elections”.