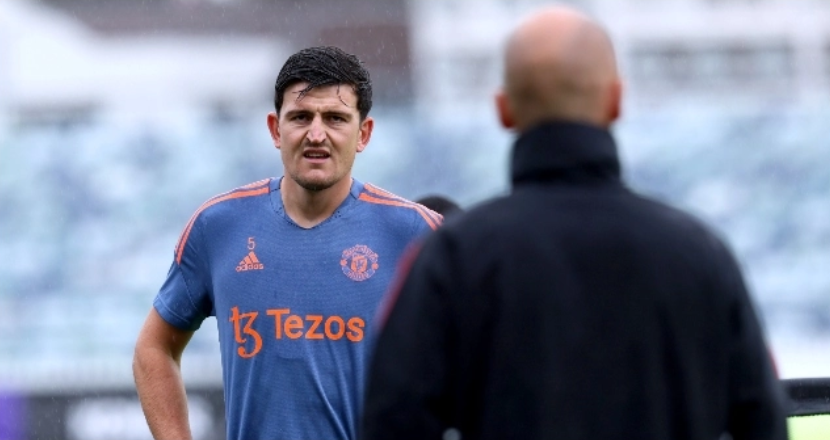 New Manchester United coach Erik ten Hag told skipper Harry Maguire on Friday that it is up to him to win over the fans by performing better.

The Dutchman also said that he is still in the market for new players and needs “more options”, with United chasing Barcelona midfielder Frenkie de Jong.

Ten Hag has stamped his mark on United during the pre-season tour of Asia and Australia but kept Maguire as captain despite the England centre-back struggling last year and being booed by fans.

The jeering has followed the 29-year-old to Australia, where Maguire was targeted by a smattering of fans in their 3-1 victory over Crystal Palace in Melbourne.

“We heard,” Ten Hag told reporters in Perth ahead of United’s friendly against Aston Villa on Saturday.

“But you see, if you perform, it slows down. It’s about how can we change it.

“The team and Harry can by performing, and that is the only focus.”

United have impressed in their first games under disciplinarian Ten Hag with convincing friendly victories over Liverpool, Melbourne Victory and Palace.

Their attacking play, hallmarks of Ajax during Ten Hag’s reign, has led to renewed confidence ahead of the new Premier League season following their disappointing sixth-placed finish last season.

The Red Devils appear set to start the campaign without Cristiano Ronaldo, who hasn’t reported back for pre-season after asking to leave Old Trafford. He is missing the tour due to “a family issue”.

“Of course. But concerning is maybe not the right word,” Ten Hag said when asked if he was concerned about Ronaldo’s absence.

“I focus on the players who are there, they are doing really well, they are in good shape.

“I prefer to focus on that and develop that. I cannot wait for him to come in, then we will integrate him.”

As the Ronaldo drama plays out in the background, United are intent on strengthening their squad before the transfer window closes on September 1.

United have signed left-back Tyrell Malacia, centre-back Lisandro Martinez and playmaker Christian Eriksen but appear in need of a central midfielder and forward.

“We signed Eriksen for the midfield department, so we are really happy with that,” Ten Hag said.

“We need more options where you have a good team, and it’s not only about the team, you need a good squad to get the right results at the end of the season.

“So we have to strengthen the squad even more and we are looking around, but we also need the right players.”