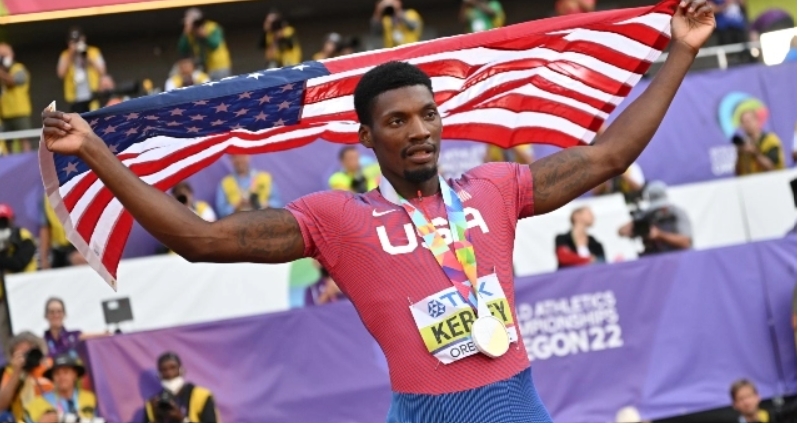 American Fred Kerley led a US clean sweep as he stormed to victory in the men’s 100m at the World Championships in Oregon on Saturday.

Kerley, in lane four, trailed Marvin Bracy for 95 metres of the tight race but managed to out dip his teammate for victory in 9.86 seconds at Eugene’s Hayward Field.

Bracy took silver in 9.88sec, and Trayvon Bromell claimed bronze at the same time for a third-ever 100m world championship clean sweep for the United States after 1983 and 1991.

The fourth of the strong US quartet, Christian Coleman, the reigning world champion from Doha in 2019 who was banned from the Tokyo Olympics for missing three doping tests, finished sixth (10.01) despite an electric start.

“We said we were going to do it and we did! USA, baby!” Olympic silver medallist Kerley said to roars of approval and applause from a partisan home crowd.

“I didn’t know until I looked up and saw the clock with my name ‘Fred Kerley’ on it,” added Kerley, whose path to gold was made easier by the withdrawal of Italy’s Olympic champion Marcell Jacobs earlier Saturday.

“It means a lot and I’ve done something not many 400m runners have done,” Kerley said, adding: “I know today opened up many doors for me. The future is bright for me.”

The last US clean sweep featured Carl Lewis, Leroy Burrell and Dennis Mitchell, something not lost on the modest Kerley or silver medallist Bracy.

“This is history, to be part of something that has only happened three times ever just means the world to me.”

Bracy meanwhile paid tribute to Kerley’s remarkable versatility. The 27-year-old started his career as a 400m specialist before switching down to the shorter 100m.

“The guy’s special, he’s a rare talent to be able to do all three events, his range is limitless. He might do 800m next year, we don’t know!

“He’s a special cat, amongst an elite group of people like the (Usain) Bolts the Wayde van Niekerks.”

Kerley has now set his sights on the 200m starting Monday and is also not ruling out runs in the 4x100m and 4x400m relays.

“If the coach allows me!” Kerley told reporters.

It was far from plain sailing for the in-form Kerley, who set out his stall with a heat-winning 9.79sec on Friday, as all the sprinters got off to a good start.

Bracy and Coleman looked like they might deprive Kerley of gold many had predicted he would win.

But they hadn’t counted on his savage finishing skills, the former 400m runner showing all his strength at the line. Bromell also left it late to sneak onto the podium from lane eight.

As the crowd realised it was a US clean sweep, chants of “U-S-A” rang out and flags brandished.

Jamaica’s Oblique Seville finished fourth in 9.97sec, just ahead of South African Akani Simbine, who was clocked at 10.01 like Coleman in sixth.

Failing to advance from the semi-finals to the final were Canada’s Olympic 200m champion, Andre de Grasse, also a two-time 100m bronze medallist, and 2011 world champion Yohan Blake of Jamaica.

The build-up to the final was rocked by the decision of Olympic champion Jacobs to withdraw just hours before the semi-finals with tightness in his right thigh.

Italian team doctor Andrea Billi said that evaluation of the contraction had found a “clinical picture that can put muscle integrity at risk and lead to injury”.

Jacobs, who pulled off one of the shocks of the Tokyo Olympics last year when he stormed to victory in the 100m in 9.80sec, was crowned world indoor 60m champion in Belgrade in March but has struggled with injury since.

“I am a fighter and this is why I decided to be in Eugene,” he tweeted, saying it had been a “painful choice, I am forced to stop”.