Man City Fight Back To Salvage Draw Against Newcastle 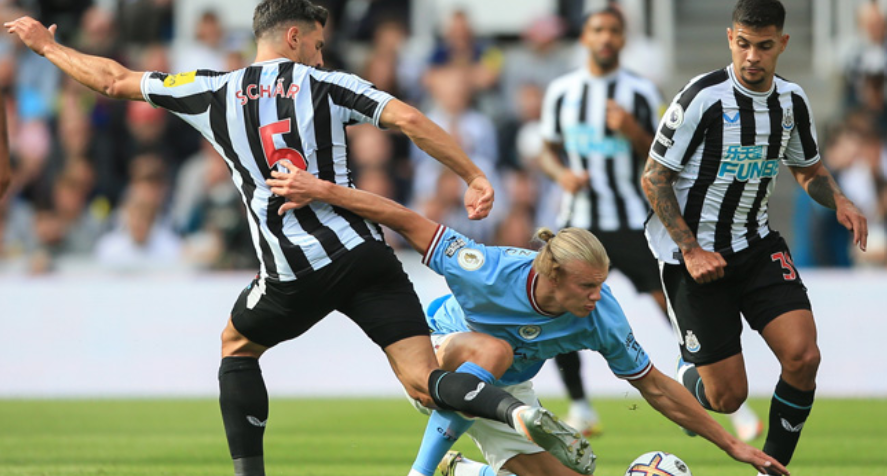 Erling Haaland helped Manchester City fight back from 3-1 down to salvage a 3-3 draw from an enthralling encounter at Newcastle on Sunday.

Despite Ilkay Gundogan’s early opener for City, Newcastle had the champions on the ropes as goals from Miguel Almiron, Callum Wilson and Kieran Trippier had St. James’ Park rocking.

But Haaland sparked the revival when he fired home his third goal since joining from Borussia Dortmund before Bernardo Silva’s equaliser extended City’s unbeaten start to the season.

Pep Guardiola’s men move up to second, two points adrift of Arsenal, but missed the chance to open up a seven-point advantage on Liverpool ahead of their trip to Manchester United on Monday.

Newcastle have not splashed the cash of the Saudi sovereign wealth fund to the extent expected in the transfer window with Nick Pope, Matt Targett, and Sven Botman the only signings made by the Magpies.

But they showed they are now a force to be reckoned with, even for the Premier League’s elite, by pushing City to the limit.

Newcastle had taken four points from their opening two games without conceding a goal.

That record was wiped out within five minutes as City quickly took control.

Silva was recalled to Pep Guardiola’s starting line-up for the first time in the Premier League this season with the midfielder linked with a move to Barcelona and Paris Saint-Germain.

The Portuguese international made an immediate impact as his cross was controlled and finished by Gundogan.

Pope then had to make good stops with his feet from Kevin De Bruyne and Phil Foden to keep his side in the game.

But Newcastle’s intensity and energy soon swarmed over City with the pace of Allan Saint-Maximin causing havoc.

Almiron blasted over a glorious chance from Saint-Maximin’s cross before Wilson should have done better than a tame shot into the arms of Ederson when a corner broke his way.

Newcastle’s pressure finally got its reward on 28 minutes and it was a sweet moment for Almiron, who was mocked by Jack Grealish during City’s title celebrations at the end of last season.

The Paraguayan’s finish was unorthodox as Saint-Maximin’s cross came off his thigh to leave Ederson with no chance.

Saint-Maximin was the creator again as Newcastle turned the game around before half-time as Wilson latched onto his pass and prodded beyond Ederson.

Haaland had been kept quiet before the break but exploded into life with the smallest glimpse of an opportunity in the second half and came within inches of an equaliser as his fierce low shot was turned onto the post by Pope.

Moments later, City looked destined for a first Premier League defeat since February when Trippier curled a brilliant free-kick into the top corner after John Stones resorted to hauling down Saint-Maximin on the edge of the box.

Haaland’s predatory instincts were on full show as he started the comeback by firing into the roof of the net when Rodri knocked a set-piece back across goal.

The Norwegian then showed the other side to his game as his electric pace burst onto De Bruyne’s through ball and forced Pope to come flying off this line to block.

De Bruyne’s next defence-splitting pass did lead to the equaliser as Silva produced a composed finish to level at 3-3.

The drama did not end there, even if the scoring did, as Trippier had a straight red card for a late lunge on De Bruyne reduced to a yellow after a VAR review.

But City failed to turn their momentum into a winner in the closing stages as they blinked for the first time in their title defence.