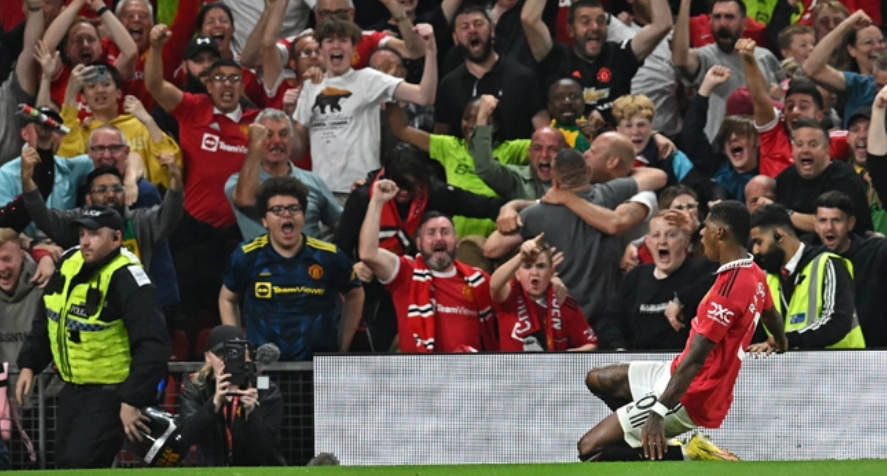 Erik ten Hag secured his first win as Manchester United manager as goals from Jadon Sancho and Marcus Rashford beat Liverpool 2-1 at Old Trafford on Monday.
United had started the weekend bottom of the Premier League, but moved above Liverpool on a massive night for their new Dutch manager.Liverpool’s expected title challenge is fading fast with Jurgen Klopp’s men yet to win three games into the new season.United fans began the evening by marching on Old Trafford in protest at the decade of decline overseen by the club’s owners, the Glazer family.

A social media movement encouraging supporters to boycott the game in the wake of an embarrassing 4-0 defeat at Brentford last weekend failed to materialise.

But even amid the jubilation of a first league win over Liverpool since 2018, chants of “we want Glazers out” persisted throughout the 90 minutes.

Ten Hag responded to the concession of four goals inside 35 minutes at Brentford by dropping Cristiano Ronaldo and captain Harry Maguire among four changes.

After becoming the first United manager in more than a century to lose his first two games, the former Ajax manager got the response he desired in an explosive opening half hour that rocked Liverpool back on their heels.

Anthony Elanga should have opened the scoring when he curled off the base of the post after two passes from Scott McTominay and Bruno Fernandes carved Liverpool wide open.

Defensive disorganisation has been a repeated failing of Liverpool’s winless start to the season and they failed to learn their lesson for the opening goal on 16 minutes.

A neat one-two between Elanga and Christian Eriksen opened up the Liverpool defence once more and when the ball was cut back to Sancho, he left James Milner on the floor before coolly slotting home.

Milner bounced back up to confront Virgil Van Dijk for his role in the goal as the Dutch defender sat off Sancho.

Alisson Becker was then forced to tip Eriksen’s dipping free-kick over before the visitors were able to restore some order in the closing stages of the first half.

United nearly gifted them an equaliser when Fernandes blasted Milner’s header towards his own goal and was fortunate to see the ball rebound back off Lisandro Martinez on the line.

Liverpool’s reluctance to refresh Klopp’s midfield options will face more scrutiny in the final days of the transfer window.

With Thiago Alcantara and Naby Keita out injured, the 36-year-old Milner showed his age and Klopp had precious few options to turn to on the bench with new 75 million euro (£64 million, $77 million) striker Darwin Nunez serving the first of a three-match ban for being sent off on his home debut.

Liverpool’s lack of energy in midfield was exposed for United’s second goal as Jordan Henderson’s poor touch presented possession to Anthony Martial and his perfect through ball set Rashford free to score his first goal since January.

Restoring Rashford’s confidence is one of the many tasks that still lie ahead for Ten Hag.

But the England attacker looked more like his old self and only a fine save from Alisson low to his left denied Rashford his second and United’s third.

United goalkeeper David de Gea’s error opened the floodgates at Brentford but the Spaniard also played his part in a night of redemption with a point-blank save from Luis Diaz.

Mohamed Salah’s header set up a grandstand finish 10 minutes from time, but United summoned a steel rarely seen in recent seasons to see out the closing stages and secure a much-needed boost for their new boss.