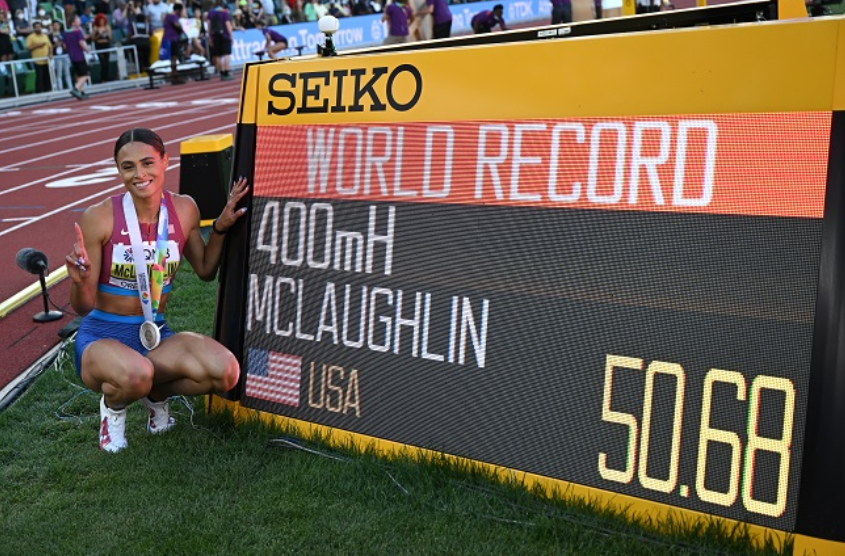 American Sydney McLaughlin set the world championships alight Friday when she obliterated her own world record en route to gold in the 400m hurdles.

In a consummate display of front-foot running, McLaughlin left a loaded field for dead from the gun, haring through the tape in an astonishing 50.68 seconds. It sliced more than half a second off her previous world mark of 51.41sec set last month.

“We took the 400m hurdles and made it something you want to watch,” said McLaughlin, adding that she was proud to have once again delivered at a “big-stage race”.

“I knew the pressure was going to be there tonight. The time is absolutely amazing and the sport is getting faster and faster.

“Just figuring out what barriers can be broken. I only get faster from here.”

Femke Bol of the Netherlands took silver in 52.27sec while defending champion Dalilah Muhammad of the United States took bronze in 53.13.

To put McLaughlin’s staggering performance in perspective, her time after negotiating 10 hurdles over 400m would have seen her beat two runners in the women’s flat 400m final, raced just minutes beforehand.

That race was won by two-time Olympic champion Shaunae Miller-Uibo of the Bahamas.

Miller-Uibo, who was deprived of gold in Doha in 2019 by Salwa Eid Nasr of Bahrain — since banned from the Tokyo Games and these championships after three missed doping tests — timed a world lead of 49.11sec at Hayward Field.

Marileidy Paulino of the Dominican Republic claimed silver in 49.60sec, with Sada Williams of Barbados taking bronze in a national record of 48.75.

The men’s one-lap final was claimed by American Michael Norman, whose victory made up for a disappointing fifth-placed finish at the Tokyo Olympics.

Norman, who failed to advance from semi-finals in the Doha worlds in 2019 with a thigh injury, clocked a winning time of 44.29sec.

World record holder Wayde van Niekerk of South Africa, who set the record of 43.04sec when winning gold at the Rio Olympics, finished fifth in 44.97sec.

There was drama in the battle for silver and bronze, however, as American Kara Winger (64.05m) and Japan’s Haruka Kitaguchi (63.27) snatched the resepective medals with their sixth and final throws.

The US-born world record holder and Olympic champion, seeking to improve on his world silver from Doha, was faultless up to his 5.75m qualifying mark.

“I didn’t want to take too many jumps,” said Duplantis, who set a world outdoor record of 6.16m in Stockholm last month. “I just wanted to make it safe to the final.

Olympic champion and home favourite Athing Mu led US teammates Ajee Wilson and Raevyn Rogers into the final of the women’s 800m.

The United States safely negotiated the heats of the 4x100m relays.

The world champions in Doha, featuring Coleman and Lyles in that line-up, could only finish sixth in last year’s Tokyo Olympics.

But the US team held a pre-worlds relay camp for the athletes to better hone their baton-exchanging skills.

Melissa Jefferson, Aleia Hobbs, Jenna Prandini and Twanisha Terry got the baton around in 41.56sec for the US women.