Mohamed Salah Presented With FWA Footballer Of The Year Award 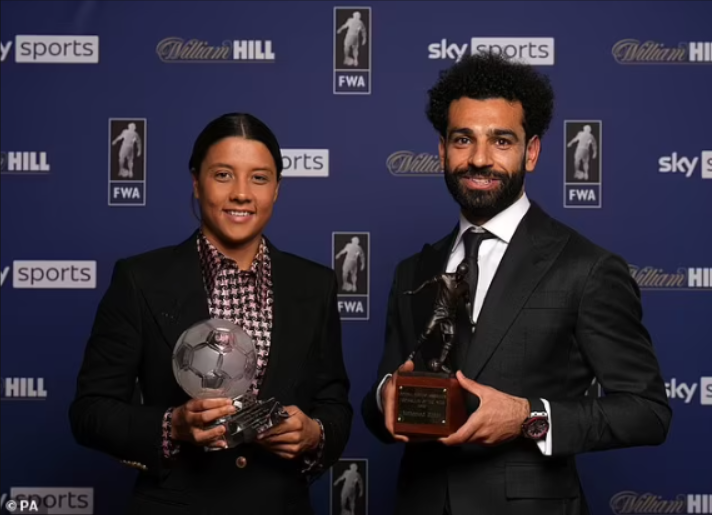 Mohamed Salah has insisted that quadruple is on for Liverpool after picking up his FWA award in central London on Thursday night.

The Liverpool striker was nominated as Footballer of the Year by the Football Writers’ Association, a group of around 400 journalists, for the second time after his win in 2017-18.

He said: ‘It feels great. First of all, I want to thank everyone who voted for me. Of course, journalists are a big part of the football family, and hopefully we can win some more this season.

‘(Is the quadruple realistic?) I think so. Not everything is in our hands – we have to win our games in the Premier League and see if City drop points or not. They have a great team, great manager, I’m sure they want to keep winning. But it’s possible.

‘We’ve been together for five years, we know what it takes to win. In the last game we were 2-0 down, away, and we managed to come back. That’s really important for our mindset, for the next games. We have the mindset we can win any trophy.’

And Salah went on to say the Champions League final against Real Madrid on May 28 will be a ‘revenge mission’ for his side – after he was carried off injured after a bad tackle in the 2018 final against the same opponents, which the Spanish side won 3-1.

He added: ‘I’m so excited, I’m sure the team as well is so excited about it. I’m sure it’s going to be a tough game, they’ve beaten a lot of good teams. We just need to focus on the game.

Chelsea striker Sam Kerr took the Women’s Footballer of the Year award after scoring 18 goals for Emma Hayes’ side, leading the Women’s Super League table by one point from Arsenal with one game left this season.