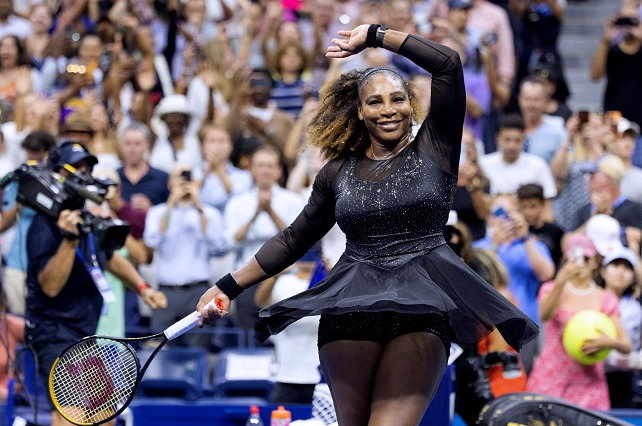 Serena Williams said she is “staying vague” over her expected retirement from tennis after reaching the US Open second round on Monday.

“I have been pretty vague about it, right? I’m going to stay vague because you never know,” said the 40-year-old after beating Danka Kovinic 6-3, 6-3.

Williams, a 23-time Grand Slam title winner, said earlier this month that she was “evolving away” from tennis and that “the countdown” was on for her retirement after 27 years as a professional.

Before Monday, the former world number one had won just one match on tour all year and seen her ranking slip to 605.

That kind of form prompted her to reveal that she was on the brink of retirement and hinting that this US Open would be her farewell.

However, the guessing game over her concrete plans for the future continued Monday with mixed messages delivered on court and then in her post-match news conference.

“It was such a hard decision,” Williams told her on-court interviewer when asked about her original announcement revealed in a essay for Vogue magazine.

“I think when you are passionate about something it is always hard to walk away,” she said.

“I have been trying to decide what to do. I love this game.

She added: “I think now’s the time. I have a family and there’s other chapters in life. I call it evolution.”

“It’s like Serena 2.0. I will still be crazy, I’ll still be intense. I’ll still be around. But I look forward to waking up and not having to run onto a tennis court.”

On Monday, Williams, who arrived on court in a diamond-encrusted black dress and jacket that sparkled under the lights, overcame a nervy first game for a hold of serve.

The American star brought the crowd to their feet with a break for 2-0, chasing down a net cord to hit a winner.

Kovinic, the world number 80, has enjoyed a solid year at the Slams, reaching the third round of the Australian and French Opens.

However, Williams buried the error count — she served up six double faults in the opener — levelled and then raced away with the next three games to take the first set.

Another break for 3-2 arrived in the second set on the back of crunching drives from the back of the court.

A love service game gave the American a 5-3 lead and a final break of the night gave her victory.

She celebrated with a little jig on the baseline and a broad smile, much to the delight of a crowd which included the likes of tennis legend Martina Navratilova, ex-world heavyweight champion Mike Tyson and former US president Bill Clinton.

The crowd held up cards to spell out “Serena, we love you”.

Next up for Williams is second round clash against No.2 seed Anett Kontaveit of Estonia on Wednesday.