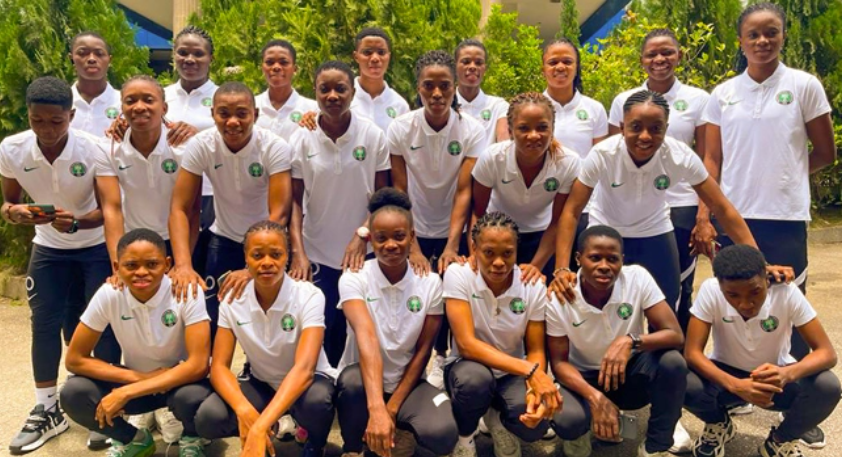 The Falconets will start another quest for Nigeria’s first U-20 Women’s World Cup title in Costa Rica on Thursday. The competition started on Wednesday with Germany losing to Colombia in the first match of the tournament.

Drawn in a tricky Group C with Canada, Korea Republic, and France, Nigeria will battle with the Europeans in their first game at the youth competition.

The age-grade event, which was moved from 2020 due to the COVID-19 pandemic, is the 10th edition of the championship.

Pedigree and Road to Costa Rica

Having participated in all editions since its inception in 2002, Nigeria is not new to the competition. They emerged runners-up twice – 2010 and 2014 and have reached the quarter-finals on five occasions. A group stage ouster in 2002 and 2016 is the West Africans poorest showing at the 16-nation tournament.

But in the Central American nation, the Falconets will fancy their chances of going all the way to winning the title.

Nigeria’s flawless form en route to the competition further heightens hopes among fans that they will put up a good showing in Costa Rica. They won six of their seven matches (drawing only away to Cameroon) to book a final spot.

They began their campaign against the Central African Republic (CAR) in the second round of qualifiers and shipped 11 goals past them.  Their next opponents were the Republic of Congo whom they dispatched 4-0 in the first leg (their opponents did not show up for the second leg in Nigeria).

Despite the team’s ruthless display during qualification, Falconets’ coach Chris Danjuma says his girls won’t rest on their oars.

“We took a long route to get here, having to play four different teams in the qualifying series. I can tell you that we are prepared to make Nigeria and Africa proud,” he told the NFF.

Going to Costa Rica, Coach Danjuma called up 21 players, made up majorly of those who featured in the qualification series.

He will be relying on team captain Oluwatosin Demehin; the free-scoring front three of Mercy Idoko, Flourish Sabastine, and Joy Jerry to do damage against their opponents.  Esther Onyenezide, Adoo Yina, and Deborah Abiodun are expected to pull the strings in the middle of the pack.

These players will need nothing short of their best to make it out of a group that many have described as tricky considering the calibre of teams in it.

Korea DPR, perhaps the most successful of the lot, won the cadet championship in 2006 and 2016. The Asians, one of the powerhouses in women’s football, will be eager to make it three trophies at the level.

Aside from the two-time winners,  Group C has the Little Blues of France. With eight appearances in the competition,  they are looking to better their second-place finish at the 2016 edition of the Women’s U-20 World Cup.

Their championship credentials will be put to the test when they go head-to-head with Nigeria at the Estadio Nacional de Costa Rica, San Jose.

Speaking about France’s Group C opponents, Coach Sonia Haziraj admits her side face a daunting task against some of the top teams. She’s also particularly wary of Nigeria’s athleticism going into the first game.

“I’m extremely wary of Nigeria. I have massive respect for the African game and Nigeria have a number of players who possess real quality. The Nigerians always get out of their group at the youth tournaments. I’ve watched them and they’re a well-drilled, hard-working side. They have great pace and are very athletic, and we’ll have to be ready to match them in that respect,” she told FIFA.com.

“As for Canada, they’re a solid side. When I look at the teams we faced in the Sud Ladies Cup, I can see parallels with the sides we’ll come up against in Costa Rica. USA, with their pace and direct attacking play, are similar to Nigeria, whilst the Netherlands are very much like the Canadians in that they’re really disciplined, athletic and afford you very little in the way of space.

“When it comes to the South Koreans, we haven’t got too much of an insight. What we do know is that, just like all Asian teams, they’re a very tough side, a strong unit, and cover a lot of ground.”

As for Canada, they were the hosts of the 2014 edition and will begin a tasking first-round battle with Korea DPR. Their best finish was at the maiden edition in 2002. Then, the competition was for U-19s and the North Americans with a team including the young Christine Sinclair bowed to the US in the final at Edmonton’s Commonwealth Stadium.

Since the tournament started, Canada have qualified eight out of ten times.

While they did not make it to the last edition in 2018 and failed to qualify from their group in 2016, Canada’s head coach Cindy Tye says her team are no pushovers and are poised to make a statement this time.

“We’re not underdogs here. The group feels that they’re in a very good space right now,” said Tye, who doubles as the coach of the Dalhousie University women’s team. “We’re very ambitious. We would like to podium. And we feel that we’re going to take some people by surprise as we go.”

Below is a list of Nigeria’s matches at the U-20 Women’s World Cup as well as the date and time: